The area is known for its eerie atmosphere, as the skies will instantly turn dark gray regardless of whether it is daytime or nighttime (you can only see a faint sky above it). 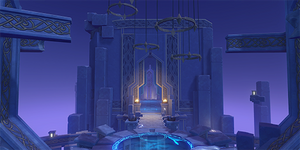 Like for Cecilia Garden, initially there will be a large rock on top of the domain. To unlock the domain, light up four Ruins Torches scattered around the domain (some will be above on the hillside) and then activating the nearby Geo Monument. After that, the large rock will be broken, and the domain will unlock.

This puzzle is on the top peak of Wuwang Hill, slightly southeast of Qingce Village. The writing is in the center of a small pool surrounded by a large number of statues.

"...Its bones pierced, its spirit faded, its form and soul both decimated...still did its flesh survive...Here stands this statue, to watch in each direction: the wind-swept ruin, the snow-capped peak, the adepti's abode, and the city of Liyue..."

For this puzzle you have to only activate the four statues that are directly facing towards the hinted key location. The sequence of which ones to activate does not matter as long as they are the key 4, the puzzle will reset after four statues were selected if any of them were wrong and a Precious Chest appears if correct. The locations:

Just because a statue is positioned in the correct direction relative to the center with the incomplete writing does not mean it is necessarily the right one. The statue has to be DIRECTLY facing that direction. To check, before activating one, stand directly behind the statue and face your character in the exact same direction, then open the Map and check where your character arrow points to. At good graphics settings on the game, Dragonspine and Stormterror's Lair are directly visible from this spot in the distance making them easier to pick out, but the other two may not be so obvious so make sure to check on the map first.

There is a deserted and ruined village in the area, in which Meng, Big G, Little Wu, Mumu and Congzi hailed from before it was abandoned, with the latter stating that a "disaster" completely destroyed the village. The forests contains ghost lights that float around, along with the Hidden Palace of Zhou Formula Domain, which has to be unlocked by completing a puzzle.

This "disaster" may refer to a legend in which a sea monster from a distant land ensnared the youths of Wuwang Hill using a certain whale-like song, luring them into Bishui River and drowning them. This happened year after year, until all that was left were the elderly, who passed on from natural causes. The ley lines in the area absorbed the hopes and dreams of those who died, recreating them with elemental energy. This phenomenon can ensnare travelers passing through the area, leading them to their doom much like the Wuwang villagers of old.[1]