Windtrace is a recurring event in Genshin Impact. A classic Mondstadt game, handed down throughout its history.

Players shall be split into two sides: the Rebels, members of the ancient resistance, and a Hunter sent by the ancient aristocracy, who will then have a contest of wits in the Contested Zones.

This event can be found under 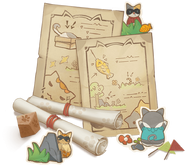