Galesong Hill, Mondstadt
This plain bathes in an everlasting breeze. An ancient, monumental tree left behind by an ancient heroine speaks softly amidst the winds.
Windswept Wilderness, Viewpoints
A valley surrounded by winds. In its middle grows a large oak tree.
The shade of the tree protects the Statue of The Seven built at its feet from the rain and the wind, like Vennessa once protected Mondstadt.
Expedition description

It is the location where Vennessa is said to have ascended to Celestia, where she became a god and now watches over Mondstadt as the Falcon of the West of the Four Winds. The massive oak tree is believed to have grown there after she ascended. 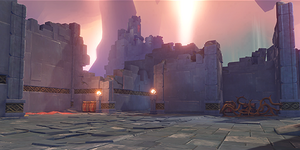 Temple of the Falcon