Inazuma
Plants and trees grow densely over Watatsumi Island. Their color is distinct from those in other islands.
Version 1.6 Special Program

Watatsumi Island (Japanese: Watatsumi-jima) is one of the islands of Inazuma. Among these islands, it is located the farthest and on the opposite end of Narukami Island. It is known for its dense foliage in breathtaking colors which are distinct from plants found elsewhere. 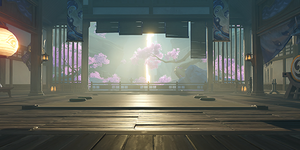 Palace in a Pool

Watatsumi Island got its name from the phrase "the god of the oceans" from Watatsumi's ancient language.[1] It was created by Orobashi after the Archon War.[2] The giant corals found at the island were coral branches that were broken off from Orobashi's body. These corals were later used as a ladder by the people of Enkanomiya to rise to the surface.[3] The people of Enkanomiya became the ancestors of the people of Watatsumi. Under the leadership of the Sangonomiya Clan, they worship the Watatsumi Omikami (Japanese: 海祇大御神) instead of the Raiden Shogun.[4]

The Sangonomiya Shrine is located at the center of this island, surrounded by a canopy of mountains and waterfalls. The distance from the capital city has allowed the residents of this island to develop its own unique culture and customs, and as such, many Inazumans outside of this island are well aware of the poor relationship they have with the Shogun and her government — there was a brutal war between the two long ago, but eventually ended with the Sangonomiya Clan pursuing peace.

As a result, the Vision Hunt Decree has driven hostility between the Sangonomiya Clan and the followers of the Raiden Shogun, particularly the Tenryou Commission, to an all-time high, and the Watatsumi Army has risen up in opposition to the decree.[4] Following the abolishment of the Vision Hunt Decree, negotiations are underway to reconnect Watatsumi with the rest of Inazuma under the Shogunate's rule.

According to legends, the depths of Enkanomiya attempts to absorb the spirit of Watatsumi Island, which causes the soil to bleach and erode, and, if left unchecked, will turn the island into a desert. To prevent this, a ritual called the Watatsumi Mitama Omatsuri is conducted regularly. A Jade Coral Branch from Enkanomiya is required to conduct the ritual. After the events of the Three Realms Gateway Offering, Kokomi decides to find a new way to counteract the Holy Soil phenomenon as to no longer disturb the vishaps.

There is an old Enkanomiya prophecy that foretells the rebirth of the Dragon of Water in human form.[5]