Bishui Plain, Liyue
The inn that stands at the southern end of Dihua Marsh seems to serve as something other than a resting place for guests. They say that Wangshu Inn is a haven for lovers' moonlit rendezvous. Folk stories also have it that even ones as august as the adepti sometimes bask in the moonlight here.
Vigilant Guardians' Vantage Point

Wangshu Inn (Chinese: 望舒客栈 Wàngshū Kèzhàn, "Wangshu Inn (fig. Moon Inn)") is a landmark south of Dihua Marsh, built upon a massive stone pillar. According to Zhongli, the inn was built tall to provide visibility and is a strategic location that must be defended.[1]

As most of the patrons that stop here are traveling merchants, the inn provides an area for them to trade and set up stalls. The view from the top of the inn is jaw-dropping — weather permitting, you can see all the way to Mt. Qingce and Jueyun Karst in the distance.

Legend amongst the stalls says that the tower of the inn hides a mysterious secret, but that's as far as the legend goes, as no one has ever been able to verify the claims.

The inn itself is run by Verr Goldet and her husband, Huai'an, who are both secret agents under the Liyue Qixing reporting directly to Ningguang.[2] The commercial aspect of the inn is a front to their real task of covertly assisting Xiao in his excursions of excising plagues from Liyue.

An interactable object in Liyue at Wangshu Inn's topmost floor can be found. Interacting with it starts a puzzle.

Observe
Rockery: (A basin of what seems like a rockery used for decoration. A strange marking adorns its peak.)
Rockery: (Look for a similar-looking mountain in your travels in Liyue, and examine the peak of such a mountain carefully. Who knows if you may find something unexpected...)

The peak is found near the Statue of The Seven at the Sea of Clouds to the south. At the top of the cliff is a dig site marked with a spade. Dig to uncover a Precious Chest. After the puzzle is completed, Rockery in Wangshu Inn is no longer interactable. 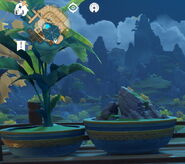