Amano Mizuhana (水花 天乃)[2]
Verr Goldet is an NPC at the Wangshu Inn at Dihua Marsh, Liyue. She is the owner of the inn — a distinction she is very insistent about. She also sells the inn's dishes and recipes.

Verr Goldet is involved in the Archon Quest "Wangshu". Her dialogue will change slightly after completing the quest. 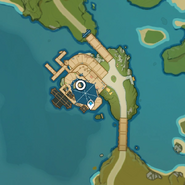 Verr Goldet is the boss of Wangshu Inn and the wife of Huai'an. She allegedly hails from Mondstadt and moved to Liyue once she got married. However, Jiangxue notes that nobody from Mondstadt knows her, indicating that she is either using an alias, or may come from another nation.

Both Verr and Huai'an, along with the rest of the Wangshu Inn staff, are agents of the Liyue Qixing and pass their intel to Ningguang.[3] The two established Wangshu Inn to covertly support Xiao in his mission to suppress the emanations of evil gods.

Verr Goldet is a blunt woman who is quick to either confirm or deny rumours, however she is still interested in other important news. She is proud of her position as the boss of Wangshu Inn as well as the inn itself constantly promoting it for its good food and view of the moon.

Verr Goldet is a medium height woman with a fair complexion. She has gray-ish brown eyes and long, dirty blonde hair with blunt bangs and two side pieces of hair framing her face, styled with a braid that goes around the back of her head.

She wears a red, short sleeved shirt along with a traditional, dark red, Liyue overcoat with gold accents that goes down to her knees. She also wears sheer stockings along with black heels. As for accessories, Verr Goldet wears one chunky orange bracelet on each of her arms.

Verr Goldet: What'll you have? We have dishes from both Mondstadt and Liyue, and our Almond Tofu is particularly popular.
(Opens Wangshu Inn Shop menu)

Verr Goldet: My name is Goldet and I come from Mondstadt. I am the boss here at the Wangshu Inn.
Verr Goldet: Lest you think I was the boss' wife.
Verr Goldet: I'm the boss, with a capital "B-O-S-S."

Verr Goldet: Hahaha, well I'd hardly be able to operate an inn in this location without connections with the Qixing.
Verr Goldet: What I mean is I obviously need their approval.
Verr Goldet: All that other nonsense is just rumors, though.
Verr Goldet: Speaking of which, have you got any interesting news to share?

Whose is this kitty?

Verr Goldet: *sigh* ...This cat invited itself here... But it's cute, so I let it stay.
Verr Goldet: Its name is Wei. That was quite simply the first name we thought of.
Verr Goldet: You might find Wei causes a bit of mischief — you know what cats are like. But please refrain from stooping to the same level yourself.

Tell me about your husband.

Verr Goldet: Over there. He's the innkeeper.
Verr Goldet: Don't be led astray by the cheeky grin on his face. He is a rather formidable martial artist.
Verr Goldet: I also practice martial arts, as do the kitchen staff. It is a hiring requirement.
Verr Goldet: You have to have nimble use of your hands and feet when you're serving guests, don't you think?

Whose is this kitty?
(Same as before)

Tell me about your husband.

Verr Goldet: Hello there! I presume that you've heard about these meteorites sending people to sleep?
Verr Goldet: We've set aside quite a number of the guest rooms so that they can be available when victims are brought in. So, space is tight. If you want to make a booking, you should do it as early as you can.

(Dialogue options and responses are the same as normal)

Verr Goldet: Hello! Oh! Well, you certainly are a returning customer. Welcome back.
Verr Goldet: You've come at a good time: the Moonchase Festival is the best time for viewing the moon and enjoying gourmet food, and Wangshu Inn has plenty of both.