Treasure Hoarders
Ulman is an event-exclusive NPC who appears in the Lost Riches events. During this event, he can be found at Stone Gate, Liyue; Narukami Island, Inazuma, indicated by the

During the event, he hands the Traveler his Treasure Book and a Treasure-Seeking Seelie.

Based on his dialogue and appearance, he is a Treasure Hoarder. The group's symbol can also be seen on the cover of his book of treasure areas, briefly seen when checking Event Details during the event. 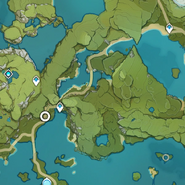 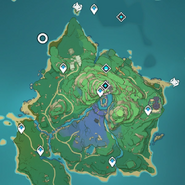 Ulman is a treasure hunter seeking Iron Coins to resell them for Mora, which are found by his Treasure-Seeking Seelie companion. When asked about his companions, he replies that he does not trust them and would not collaborate with these "greedy churls", however he does seems to deal with them as they are the ones that, for a fee, found a boat for him to get to Inazuma. He calls himself a "Seelie magnet" as he already encountered and partnered with a Treasure-Seeking Seelie twice, although they both grew uninterested about him after some time.

Ulman: So, found yourself any treasure?

I have some Iron Coins...

Ulman: Oh, do you? Hehe, I'll trade them with you for some of these beauties I've got here. What would you like?
(Opens the Event Shop menu)

Ulman: Well, it wouldn't be treasure if it was that easy to find. Take your time.

Ulman: So, how has the treasure-hunting been going?

I have some Iron Coins...

Ulman: Oh, do you? Wonderful! Now, I've got some pretty trinkets on me that I'll trade for them. What would you like?
(Opens the Event Shop menu)