ティミー Timii
Timmie is an NPC in the City of Mondstadt. He can be found on the bridge leading to the city, usually standing near a group of pigeons.

He likes to feed the pigeons and gets angry at the Traveler for making them fly away. 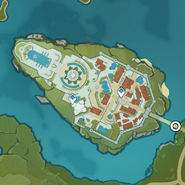 After Timmie's father left some time ago and never returned, Grace has been taking care of Timmie. While she is not biologically related to him, he considers her his mother. Because she also looks after Glory and Nora, Timmie worries about troubling her too much.

Unbeknownst to Timmie, his father died from a hunting accident. Draff, his good friend, brought him to Grace as quickly as possible, but they were too late to save him. Unable to bring themselves to tell Timmie the truth at the time, they agreed to have Grace take care of Timmie while Draff returned to Springvale, sending money and a letter to Timmie every once in a while.[3]

Timmie has trouble fitting in with his peers in the city and stays to himself, caring for the pigeons. He is extremely protective of them and holds them in unusually high regard, believing Dvalin to be an incarnation of pigeons taking revenge on those who scare them and creating an imaginary friend Ruin Guard with dreams of using it to protect them.

He loves animals in general, as while he does not like the ducks for intruding and taking the pigeons' food, he understands that they are hungry and has the Traveler place food for them away from the pigeons as part of his commission. If the Traveler kills the ducks, he becomes horrified at their actions.

Timmie: ...What're you doing!! You're scaring the pigeons away!

About Stormterror... (Only available between "Dragon Storm" and "A Long Shot", after killing the ducks in Pigeon, Duck, and Child)

Timmie: I'm thinking that Stormterror must be... a transformed flock of pigeons.
Timmie: People like you always scare them, so they turned into a dragon to get their revenge!
Timmie: But they definitely wouldn't hurt someone who's always been nice to them, like me... would they?

There's not much I can do about it now...

Timmie: Not much you can do? Hmph. Yeah, right!
Timmie: Mommy says that as long as you love the world, no animals will be scared of you!
Timmie: Otherwise, why do you think the pigeons aren't scared of me?

Timmie: They do come back usually... But what happens if one day they leave and never come back again?
Timmie: Just like daddy...