Storm Beads
Fury
Teleport
Amidst the storms of Amakumo Peak, you hear a raging, thunderous cry...
Adventurer Handbook, prior to completing Seirai Stormchasers: Part IV
An unusual Electro life form that weaves thunder and lightning as song unto the resentment that drives its every move.
Even though this creature may seem similar to the Oceanids, this creature lacks their intelligence. They say that this is an elemental being driven by pure regret.
Adventurer Handbook

The Thunder Manifestation is a Normal Boss challenge found in Amakumo Peak, Seirai Island, Inazuma. It is the congealed "regret" of the deceased Kanna Kapatcir.[1][2]

Note: Ability and attack names are unofficial except for Strike Probes and Homing Thunder Cage.

Similarly to the Electro Hypostasis, the Thunder Manifestation is an entity of pure Electro energy and thus is immune to all Electro attacks. While the Thunder Manifestation is a flying target, it typically sticks low to the ground, allowing for melee units to hit it. However, it tends to teleport frequently and as such, Pyro or Cryo characters are recommended when fighting this boss, especially bow or catalyst users due to their ability to attack and/or home in from afar and the fight mostly requiring players to dodge its attacks when it becomes berserk.

Like Specters, the Thunder Manifestation has a "Fury" buff which is initially empty. In its passive state, the Thunder Manifestation only unleashes strike probes and occasional shockwaves that increase its fury if the player is caught in them. In the event of the strike probes, simply walking out of their radius will cause its fury to deplete. The bar automatically fills if the player gets caught in one of the sporadic shockwaves or upon reaching 75% of its health if not enraged. In this state, the Thunder Manifestation uses more powerful attacks that deal massive damage if not dodged or shielded against. Geo characters can provide Crystallize to generate Electro shards, which can mitigate a reasonable amount of damage from its attacks. 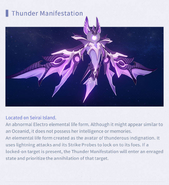 Arena as viewed from above

How to Easily Beat the Thunder Manifestation

Scale the broken Amakumo Peak and follow the song of a distant storm.
Manifest thunder weaves rebellious lightning from an overlooking vantage.