Thousand Winds Temple is an ancient amphitheater in Starfell Valley, Mondstadt. It may have been used as an arena back in the Aristocratic Period, where slaves were made to fight each other for the satisfaction of the old nobles. 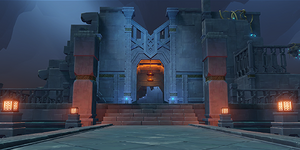 Temple of the Wolf

Inscription: "Seeds of stories, brought by the wind and cultivated by time."

According to Henry Morton's notes found in the Ragged Notebook (during the quest Time and Wind) the temple was associated with not only the worship of the God of Wind (Anemo Archon), but also the God of Time.

The Sacrificial Series of weapons were once used as props used in ceremonies at the temple, and their lore confirms Henry Morton's belief.[1]

The temple was built by people seeking divine intervention from the harsh blizzards caused by the conflict between the Decarabian, Lord of Storms; and Andrius, the Great Wolf King of the North.[2]