Theater Mechanicus is a recurring event in Genshin Impact.

In Theater Mechanicus, players must set up Mechanici that deal Elemental and Physical DMG to enemies throughout the arena in designated spots to prevent them from escaping the stage. Buying Mechanici requires a certain number of points, and selling Mechanici recuperates up to 50-75% of points spent.

As the gameplay mirrors that of tower defense games, characters are unable to deal any direct damage (indirect such as Fall Damage remains unaffected) and cannot use their Elemental Burst abilities, as energy is temporarily drained to 0. Elemental Skills remain unaffected and enemies can be applied elements for Elemental Reactions. Enemies are also significantly easier to stagger.

If too many enemies escape during the stage, the player automatically fails. 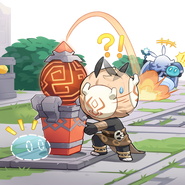 Boom! Boom! Boom! Huh!? Why did it shoot?
Abyss Mage: Come on, Slime! Let's get outta here before we're vaporized or melted!