Perilous Trail/Event
A mysterious space beneath The Chasm. It would have been exceedingly hard to get here if not for your accidental fall, and the way out is just as unclear
World Map description

The Chasm's Bed is a quest exclusive location in The Chasm: Underground Mines accessible only during the Archon Quest Interlude Chapter: Act II - Perilous Trail. During the archon quest, the player can re-enter this location at an entrance beneath the Chasm Nail. After completing Perilous Trail, the entrance will disappear and it becomes permanently inaccessible. 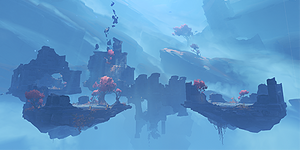 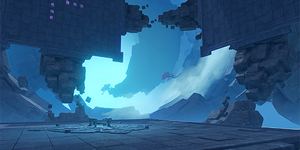 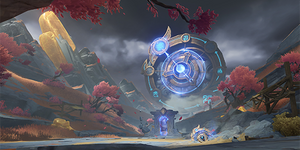 The Version 2.7 limited time event Perilous Trail featured the Archon Quest of the same name. During this event, players could access the Realms of Guile and War event mode after completing the "Chasmic Maze" quest at a location marked by the

map icon in The Chasm's Bed.

After completing "At Tunnel's End, Light," this instance becomes inaccessible and the location to access Realms of Guile and War was moved to a location marked by the

map icon near the Chasm Nail.

The Chasm's Bed (hereafter, the space) is a location in the depths of The Chasm. It is a space that has existed for a very long time before the Cataclysm. Yanfei remarks that the rocks in the space are extremely old Liyue Mountain Rocks.[1] Yelan believes there is some higher power at work that is responsible for the strange effects of the space. The Traveler speculates that maybe the Ruin Serpent could have carved out the caverns but how the space and its effects came to be is unknown.[2]

When the Cataclysm began, an "iron meteorite" impacted the chasm and then the monsters of Khaenri'ah began pouring out of the Chasm. In response, Morax sent the Millelith to defend Liyue and evacuate the miners. Boyang was among those who had been sent to fight as he and his comrades were ordered by Qixing to take the Fantastic Compass and assist the Millelith.[3] Around the same time, Bosacius, having already lost his sanity by then, was attracted by the bloodshed and was drawn to the battle. He fought in defense of Liyue while mistaking the Millelith around him for his Yaksha comrades.

As they fought, the surface of the Chasm was damaged, revealing a "great and enigmatic underground palace in the bowels of the earth." This underground palace is likely the inverted structures around the Nameless Ruins, remnants of an ancient civilization destroyed by Celestia using the Chasm Nail. The Millelith and Bosacius discovered that the monsters would grow weaker as they continued into the depths, perhaps due to the effects of the nail. So they devised a plan — by using the Fantastic Compass, a catalyst which had the power to manipulate space, they could trap and seal away the monsters. However, this plan came with a great cost: the catalyst required significant energy from both a mortal and an adeptus to power it, and the trap would seal some of them away along with the monsters. With no other choice, Bosacius and Boyang volunteered to sacrifice themselves for the sake of Liyue.

As the Millelith pushed against the monsters and marched deeper into the Chasm, they began noticing strange effects — while the monsters were being severely limited, the Millelith too were becoming limited. They passed through breaches in the caverns but those breaches would close on their own behind them; they would attack rifts but those rifts would regenerate; and they began to lose their sense of time and became very tired.[3] To resist these strange effects, the Millelith used an Orichalceous Time-Dial to mark the passage of time between each battle as they continued their advance.[4] Eventually the Millelith would figure out that no matter how many rifts they tried to attack open, there was no way out.[3][5]

After an unknown amount of time, the Millelith had lost many of their comrades but emerged victorious against the monsters. The monsters had lost all mobility and disappeared as they were devoured by the space.[5] And, so too, the surviving Millelith were also eventually devoured and disappeared leaving only Boyang and Bosacius left in The Chasm's Bed. Together, Boyang and Bosacius wandered the space aimlessly and Boyang began seeing illusions of his family, to which he thought he must be going mad.[3] Eventually Bosacius sees illusions of his Yaksha comrades and remembers his name and purpose, and together with Boyang, they use the Fantastic Compass to complete the seal around the Chasm's Bed.[6] Bosacius then perishes leaving Boyang the last one left until eventually he too perishes.[3]

Five hundred years later, the Traveler enters the Chasm and encounters the Ruin Serpent. As the Traveler fights the serpent, Yelan shoots at the Chasm Nail causing it to fall and hit the Ruin Serpent. Some time later, the Traveler returns to the Chasm and meets Yanfei, Arataki Itto, Kuki Shinobu and Yelan and the group accidentally enters The Chasm's Bed. While within the space, Yelan explains she had shot the crystal Chasm Nail because it is highly effective against remnants of Khaenri'ahn civilization. The Traveler and Yelan speculate that when the nail hit the serpent, it caused some kind of opposing force that may have damaged the seal.[2] When Yelan and Itto were about to fight, their power gave the last push to open an entrance through the seal and so they fell inside.

Inside, the group discovers that the space is reading their minds and creating illusions from their memories. Together, they devise a plan to imagine the Fantastic Compass in order for the space to create it for them, and then they use it to successfully escape The Chasm's Bed, after which the illusionary Fantastic Compass disappears.

The Chasm's Bed is a strange and chaotic space that can influence time and space, as well as read people's minds. The purpose of this space seems to be to entrap those who enter it, using various techniques and illusions to lure them deeper inside, before finally devouring them, causing them to perish and disappear. The space seems to work against all manner of creatures, including both humans and the monsters of Khaenri'ah. During the Cataclysm, the Millelith and Bosacius found the Chasm's Bed and devised a plan to take advantage of it by trapping the monsters inside it and then sealing it off with the Fantastic Compass.

Those who have entered it have felt as if the space was a living being, with Boyang wondering if they accidentally entered "the belly of some mighty leviathan."[3] The space seems to do whatever it can to prevent anyone from escaping, sending shadowy ghost-like entities after the Traveler's group when they attempted to use the illusionary Fantastic Compass to escape. A theory is that these shadowy figures may be lost souls who were devoured.

The space has a variety of effects it employs against those inside:

Entrance to The Chasm's Bed

Dialogue option at the entrance