Liyue
The Chasm, which has been sealed, has experienced unknown shifts in recent days. Muning, the Ministry of Civil Affairs representative, is getting worried.
To calm the disturbances below, an adventurous Exploration Team is formed to head down into the depths.
Go to The Chasm and clear a path for a new adventure.
Version 2.6 Website
The junction between Liyue Harbor and the great mines of the Chasm. Work has ceased here as of late due a shift deep within the Chasm.
Beyond the Chasm Viewpoint

The Chasm is an area in Liyue.

In the recent past, a series of mysterious accidents led the entire mine to be closed, putting its workers out of a job. However, the Liyue Qixing is gradually reopening the area, thus allowing miners to resume working. Beneath the Seven-Star Array is the Underground Mines. 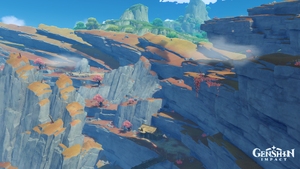 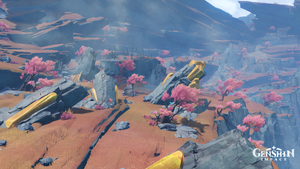 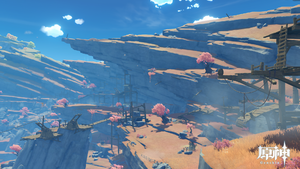 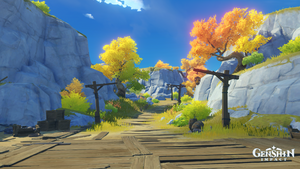 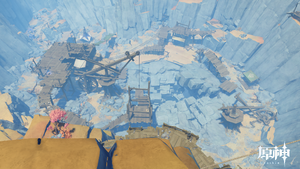 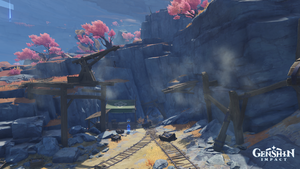 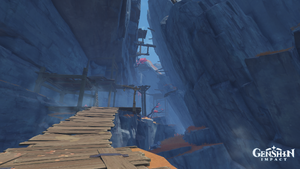 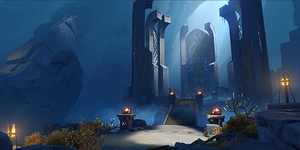 Notice: "The myriad mountains of Tianheng are a trove of a thousand treasures, for deep within the rocks bounteous jade gleams gloriously. Yet, sinister forces now beset the Chasm; its glorious gems are hidden and their crimson glow gone. The road to the retrieval of riches is rife with ruin... perilous is the path to the procurement of precious elixirs..."
Notice: "Wherefore did I immediately proceed to discuss this predicament with all Yuehai Pavilion, that they might vote on the fate of mining activities at the Chasm. Their verdict today was that it is inadvisable to continue, and all activity should cease immediately. Let it be known to all: eschew lust for riches and instead pine for a better tomorrow; be drawn not to noctilucous glow, but instead set your gaze on the perfect guidance of fate and time."

Old Storehouse Renovation Notice: "Due to the recent sudden surge of anomalies within The Chasm, the renovation of the storehouse has been stopped. All workers, please halt work and stand by for further notice. The old storehouse will be kept as-is for the use of the Millelith and any Ministry staff who may come to observe the area."

Take Note!: "This is a relic from battles of old that Rex Lapis bequeathed unto us. As such, please stick by the various safety guidelines. Do not make ruckus around it or forcibly move it. If any accidents happen due to such tomfoolery, let the blood be in your head!"

Arriving at The Chasm

(Upon approaching the Chasm entrance)
Tie Hong: Halt! The Chasm is sealed off. If you're an outsider, please... Oh, it's you!
Paimon: Oh no, run!

We've been recognized! Time to scoot!
Tie Hong: Hahaha! Sorry for scaring you. Of course I remember you. How could I forget the person who saved my life?
Tie Hong: I was only recently transferred here myself... Didn't think I'd meet you here. Guess I'm a lucky guy, eh?
Paimon: We saved you? Did we do that?
Tie Hong: Oh, come now! I was at the Jade Chamber when we fought that sea monster together. I was lightly injured and only returned to my post recently...
Tie Hong: You might not remember me, but I'll never forget you. All our comrades who fought that day witnessed what you did for Liyue.

Could you tell me a bit about The Chasm?
Tie Hong: Two years ago, an unknown incident occurred deep within the caverns and the Qixing gave the order to close the place. The miners were largely evacuated to safety.
Tie Hong: It's just a shame that such a huge mine ceased production, just like that. The workers took their compensation and went their separate ways... Once such a gathering of people is dispersed, I fear it may be difficult to get them back together again.
Tie Hong: ...Um, sorry, got a bit off-topic there. I believe that you must be here on important business, so I won't bother you any further. If you have any questions, just ask Muning directly. He should be at the campsite at the mine entrance.
Tie Hong: Also, uh, it's not that I don't trust you or anything, but it's my job to remind you not to do anything that breaks the law!
Paimon: Don't worry, you can trust us, come on!

(Talk to Tie Hong again)
Tie Hong: I apologize, but it is my duty to guard this path. If you are not here on important business, please do not remain here for too long.

(Upon entering the Chasm)
Paimon: Wow... The Chasm really is impressive...

According to legend, the Chasm was formed by a falling star somewhere around 6000 years ago. This meteorite had a "proud and agitated temper," and during the Archon War, the constant strife caused this meteorite to leap back into the heavens, leaving behind the massive expanse that was the Chasm. Dunyu Ruins was created by a fragment of this same meteorite.[1] It is also said that during the cataclysm which killed the moons the 'solar chariot' crashed here and was then repaired and returned to the sky, whether the fallen star and fallen solar chariot are the same or distinct events remains unconfirmed.[2] Due to special geological conditions, possibly as a result of the meteorite, the soil and vegetation in the area has a distinctive color, while unique fluorescent plants have thrived inside. Glazed Sand Crystals are a specialty of the area, used in creating porcelain. Legends also said that this was the area where Morax and Azhdaha clashed in battle.[3] Most recently during the cataclysm 500 years ago an 'iron meteor' which marked the beginning of the Abyss' invasion.[4]

Prior to the creation of the Chasm, the area appeared to be that of an ocean due to various marine fossils found in the mines. According to Khedive, he believes that whatever created the Chasm was done in an instant due to the perfect preservation of the fossils. The area also appeared to have been inhabited by an ancient civilization, far older than that of Khaenri'ah but was destroyed by Celestia for unknown reasons.

Sometime during or after the Archon War, the people of Liyue came to the area to mine. Azhdaha, who resided inside, greatly suffered when the humans disturbed the Ley Lines within. Morax, Mountain Shaper, Moon Carver, and a third unknown adeptus would fight the crazed elemental being, fighting their way down to the deepest depths of the Chasm, which also resulted in the creation of Dragonfall. After Azhdaha was sealed, humans returned to the Chasm once more to mine.

In Liyue, the Chasm and Dunyu Ruins are two known locations majorly impacted by the cataclysm. An 'iron meteorite' impacted the chasm and then monsters poured out of the Chasm and in response, Morax sent the Millelith to defend and evacuate the miners. An unnamed yaksha — who had once abandoned their duty to defend Liyue — returned to fight alongside the Millelith. The yaksha and Millelith who chose to lead the vanguard ultimately perished in battle. Specifically the Yaksha is said to have 'succumbed to darkness',[5] and the Fatui Anton tells us the battle of 500 years ago is still being fought beneath our feet so it is unclear the Yaksha is in fact dead. What occurred in Dunyu Ruins is unknown, but its people decided to abandon the city and move to Liyue Harbor; none of the refugees nor adepti have spoken about what happened there.[4]

In recent times, a mysterious series of accidents has led to the Chasm being closed entirely despite its wealth. Prior to the general expulsion from Liyue, the Fatui, with Signora's help, discovered that black ooze had begun to infest the mines. The Fatui offered to deal with the ooze but failed as their device exploded and no further news was expected following Childe unleashing Osial on Liyue. Eventually, the Liyue Qixing began to slowly reopen the mine, initially restricting access to the surface area. As a result, Treasure Hoarders began to sneak into the mines for wealth.

It is later revealed during the Traveler's descent into the Chasm that the mysterious earthquakes and black ooze was a result of possibly the Abyss Order corrupting a nail similar to the Skyfrost Nail in Dragonspine. After purifying the corruption, the earthquakes subsided and the ooze has since begun to recede. This has also allowed the Qixing to begin reopening the mine while ensuring the miners don't stray too far off into the more dangerous areas.

13 Soundtracks play in The Chasm: