Teyvat
You have arrived in Teyvat — a fantasy world where the seven elements flow and converge.

In the distant past, the Archons granted mortals unique elemental abilities. With the help of such powers, people formed a bountiful homeland out of the wilderness. However, 500 years ago, the collapse of an ancient civilization turned the universe upside down...

Though the calamity the world suffered has ceased, peace has yet to be restored.
Genshin Impact Official Website[1]

Teyvat is the continent that serves as the primary region of Genshin Impact.

See the Teyvat Interactive Map for the locations of important spots, items, and enemies on the map.

Khaenri'ah was an ancient civilization that was destroyed 500 years ago with the fall of the Eclipse Dynasty in an event known as the cataclysm. Little is known about the country besides the fact that it was an underground civilization that relied on its form of life-giving alchemy, the Art of Khemia, to survive.

Celestia is a floating island in the sky where the gods are said to reside. The people of Teyvat believe that mortals chosen to ascend to godhood will join the pantheon in Celestia.

The Dark Sea is a collective term for the regions beyond the continent of Teyvat. It is believed that gods who were defeated in the Archon War and refused to live under the new order of The Seven fled to the Dark Sea.

The following nations existed in Teyvat before the rise of The Seven and were destroyed at some point either before or during the Archon War.

Decarabian's Mondstadt (Mondstadt region)
The original City of Mondstadt was located in what is now known as Stormterror's Lair, under the rule of Decarabian, the God of Storms. His death at the hands of his people led to the rise of Barbatos, who was at the time a mere wind spirit who had allied with the rebels.

Guili Assembly (Liyue region)
This once-prosperous civilization was jointly ruled by Morax, the Lord of Geo, and Guizhong, the God of Dust. It was destroyed by unknown means, during which Guizhong was slain and the people of this nation were scattered. Morax eventually regathered their people and built Liyue Harbor 3700 years ago.

Sal Terrae (Liyue region)
The last remaining piece of territory held by Havria, the God of Salt, before her death during the Archon War. Because she was a gentle but weak ruler, her people eventually lost their faith in her ability to protect them during wartime and chose to kill her before another god could destroy them, believing it would be a merciful end. However, this only led to their own destruction when the power that surged from her dying body turned everyone in the vicinity into salt.

The Chasm (Liyue region)
An ancient civilization that existed during the time of the Moon Sisters. It shares architectural characteristics with both Khaenri'ah and Enkanomiya. It is said to have been filled with genius engineers who were able to repair the solar chariot after it fell to Teyvat after the disaster of the moon sisters. The ancient Chasmfolk also had a great talent for making ceramics out of remnants of the solar chariot, a material known as Glazed Sand Crystal.

Sal Vindagnyr (Dragonspine area)
Long ago, Dragonspine was a verdant mountain. The founders of Sal Vindagnyr discovered it while seeking refuge from a land of snow and strife and settled there, naming the mountain "Vindagnyr." There, they were able to communicate directly with Celestia through divine messengers. However, they eventually met their end when Celestia sent down the Skyfrost Nail, destroying their Irminsul tree and transforming the area into the blizzard-covered wasteland seen today.

Watatsumi Island (Inazuma region)
Watatsumi Island was once an independent nation, ruled by the god Orobashi along with its shrine maidens. Watatsumi coexisted with Inazuma, with both of them respecting each other's borders. However, one day Orobashi attacked Inazuma's Yashiori Island and started a brutal war. During the war, Orobashi was slain by Ei, who was at that time the kagemusha of Makoto, the previous Electro Archon. The de facto rulers of Watatsumi during the war, the Sangonomiya Clan, declared surrender and accepted Baal's rule, and Watatsumi Island was absorbed into Inazuma.

Enkanomiya (Inazuma region, below Watatsumi)
The precursor to the Watatsumi Island civilization and the current record holder for the eldest known civilization. The Enkanomiyans, before being found by Orobashi and rescued, had a relatively thriving underground civilization. They had libraries, research labs, recreational mazes and vivid culture. Enkanomiya was home to an artificial sun that drove away Vishaps, an extremely skilled militia known as the Jibashiri, a ruling faction of nobles who committed fraud and human sacrifice, and historical records with secrets damning enough to condemn gods to an execution by Celestia. 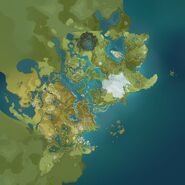 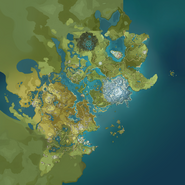 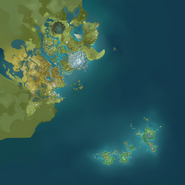 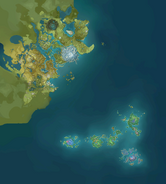 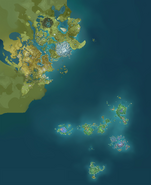 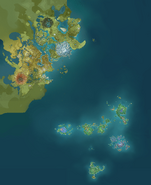