Back to page
View source

Sabzeruz Festival
Sumeru is one of the seven regions in Teyvat. It is the region that worships the God of Wisdom, the Lesser Lord Kusanali.[1][Note 1][Note 2] As of now, an ominous aura lingers in it and is currently a dangerous place.[2]

It is renowned as the center of learning and houses the Sumeru Akademiya.

Characters that are currently known to be within Sumeru Akademiya are Cyno (Mentioned in the Webtoon and The Genshin Impact Teyvat Travail Trailer) and Collei, who followed him to Sumeru in the last few chapters of the manga.

Archon Quest Chapter III: Truth Amongst the Pages of Purana takes place in this region.

The God of Wisdom's enemy is wisdom itself, and the oasis of knowledge is a mirage in the desert of ignorance. In the city of scholars there is a push for folly, yet the God of Wisdom makes no argument against it.

Sumeru's landscape features both deserts[4] and forests.[5][6] In the Teyvat Chapter Storyline Preview, Dainsleif likens it to a desert, and Liben mentions that "Sumeru is all rainforest and desert".

500 years ago, during the cataclysm, the previous Dendro Archon was slain[7] and the current God of Wisdom took their place.[8] Under the aegis of the God of Wisdom, the sages of Sumeru drive themselves into hysterics and abandon all that is worldly in their pursuit of esoteric wisdom.[5]

Lisa went to study magic at the Sumeru Akademiya, where she was considered the best student they had seen in 200 years. Despite the prestige she enjoyed there, she ultimately returned to Mondstadt after growing disillusioned with the "raving-mad scholars" and the cost of "uninhibited erudition" she witnessed in Sumeru.

The Eremite are a faction of mercenaries from Sumeru who travel throughout Teyvat.[9] They see themselves as people who are not "afraid of dying so that they might truly live."[10] Nazafarin, a scholar from Sumeru, claims that some of its members wield "bizarre yet formidable powers," and finds the subject of the Eremite unpleasant enough to swiftly drop the subject after briefly explaining them to the Traveler.[11]

Sumeru's Statue of the Seven depicts a female figure who appears to be a child.[12] She is shown to be wearing a similar cloak and draping clothing similar to the other known Archon statues. Her small frame is also shown sitting on a huge leaf, an attribute owing to her mantle as the Dendro Archon.

An annual festival commemorating the birth of the Lesser Lord Kusanali.

There are 14 NPCs related to Sumeru:

There are 2 historical characters related to Sumeru:

There are 6 upcoming NPCs related to Sumeru: 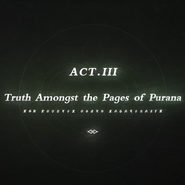