Brightcrown Mountains, Mondstadt
The one who once dwelt in that lonely tower is no more. The murmuring winds that shroud the desolate city tell of that most ancient of stories, which no mortal now remembers: they tell of their erstwhile master, the nameless wind sprite, and the chorus that caused the tower to quail...
Abandoned Capital of Howling Winds
Ruins of an ancient city filled with magical mechanisms and painful memories.
It was once used as a lair by the dangerous dragon, Stormterror.
Despite the danger, many audacious adventurers seek the treasures hidden in this place.
Expedition description

Stormterror's Lair was once the capital of Old Mondstadt, ruled by the God of Storms, Decarabian. After he was slain in an uprising, Barbatos took his place and reshaped the land. The people then moved the capital to an island in the middle of Cider Lake, where the City of Mondstadt remains to this day.

Five hundred years ago, victorious but grievously injured by the corrupted dragon Durin, the Dragon of the East Dvalin fell into a deep slumber in the ruins of the former capital. However, the people of Mondstadt forgot about him and when he reawakened; they feared him and called him "Stormterror" — giving the region its current name. This, along with the pain from the poisonous blood clots inflicted by Durin, allowed him to be manipulated by the Abyss Order.

The area is protected by a storm barrier, preventing players from entering until the Archon Quest Prologue: Act III - Song of the Dragon and Freedom quest Hurdle is completed. 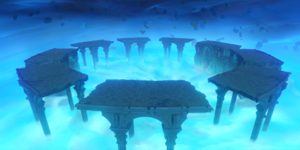 A mysterious camp is located by the southwestern mountains of Stormterror's Lair, at the top of a tall rock formation.

To reach it, activate the Anemo Monument guarded by two Anemo Samachurls within the nearby peristyle. Activating the Anemo Monument generates two Wind Currents, with which you can glide up to the top of the formation. There, two Large Anemo Slimes and one Eye of the Storm will lie in wait.

After defeating all enemies, two Common Chests and one Exquisite Chest will be unlocked. There is a sword stuck into the ground in front of a tent, but it cannot be interacted with, leaving the exact origin and purpose of this camp a mystery. The enemies in this area will respawn.