Windwail Highland, Mondstadt
A peaceful and idyllic suburban town. It has a long history of hunting, of sweet spring water, and of passing down the legend of a beneficent spirit dwelling within the waters.
Land of Clear Springs, Viewpoints

Springvale is a subarea in Windwail Highland, Mondstadt.

Springvale features dirt-paved areas and one-story tan houses with blue-tiled roofs. One singular windmill watches over it, with a naturally-occurring spring right below it. 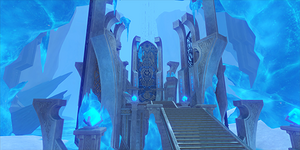 According to legend, the town was formed when a mother brought her deathly ill son to an empty well, where a fairy filled the well with life-saving water.[1] The miracle drew people to the area until a settlement was built over the spring and has remained there since, becoming Springvale. While the spring is actually melted snow and ice from Dragonspine,[2] the "fairy" that resides in the spring is very much real and is a Lochfolk from Fontaine.[3]