View source
watch 04:03
Wiki Targeted (Games)
Do you like this video?
Play Sound

언소 Eonso
Smiley Yanxiao (Chinese: 言笑 Yánxiào, lit. "Talk and Laugh") is an NPC in Liyue. He can be found manning the kitchen of the Wangshu Inn in Dihua Marsh. 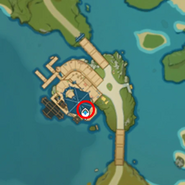 Smiley Yanxiao was once a thief who attempted to steal from the boss of an inn where he was beaten up and locked in. After getting bailed, Yanxiao became a chef in Wangshu Inn.

While he is a sous-chef, he does not provide any services. He will often move around the kitchen to inspect and make foodstuffs, often disgruntled by the food in examination being 'too salty'.

Paimon initially considers him to be similar in personality to Wagner, although he becomes much more friendlier to the Traveler once they help solve his ghost problem. Despite his appearance, he is terrified of ghosts. He also enjoys working at the inn, considering his current employers to be lenient. While he is not fond of Jiangxue due to him being a freeloader at the inn, Smiley Yanxiao ensures that he has something to eat.

Smiley Yanxiao: What do you think you're doing? You can't just waltz into the kitchen whenever you feel like it!

Smiley Yanxiao: I am Yanxiao, a sous-chef.
Smiley Yanxiao: Unless you have something seriously urgent to tell me, you'd better get out of my kitchen.

Smiley Yanxiao: See you later. Wait no — don't come back in here!

Smiley Yanxiao: Huh? What are you doing just sauntering on into the kitchen?

Smiley Yanxiao: It's fine. Kindness should be repaid in kind and however it goes.
Smiley Yanxiao: I'm hardly about to kick you out, not after you helped me with that ghost problem and all.

Tell me a bit about your life to date.

Smiley Yanxiao: What're you asking that for? Aren't you here to cook?
(Rest of the dialogue is the same as "...Just a sous chef?" from the second line onward)

Smiley Yanxiao: Pretty good. Ever since then, I've stopped seeing anything weird.
Smiley Yanxiao: But even if something pops up again, I'll be fine. The boss met an exorcist called Chongyun through some friends.
Smiley Yanxiao: If another ghost pops up, we'll call him in. Besides, they say he's pretty good at his job.

(After completing Part II: Three to Get Ready, and Here We Go)
Smiley Yanxiao: I might not have won this iteration of Masterful Chefs, but I definitely learned a lot from the competition itself!
Smiley Yanxiao: I was just planning to invent a few new dishes for the Moonchase Festival and maybe learn a few things from Chef Xiangling, but I sure learned quite a few unexpected things, too!
Smiley Yanxiao: ...Actually, what are you doing, just sauntering on into the kitchen again?