A cloud atlas symbolizing Dvalin and its former master, the Anemo Archon. It details the winds and clouds of the northern regions and contains the powers of the sky and wind.

An atlas of wind.
A copy of the atlas pertaining to the weather of the northern regions, presented in the form of poems and images.
It consists of 100,000 odes, each dedicated to a single cloud or wind and calling it by name.
The cloud atlas gave form to the winds, and odes infused them with personality.
The myriad formless winds are now friends and family in the eyes of Barbatos.

Legends tell that in ancient times, Barbatos summoned the four winds with the original version.
He thawed the snow, drove away vicious beasts, summoned rainfall, and created Mondstadt.
He permitted the atlas to be shared and copied among the people, giving it the name of Cloud Atlas.
Sadly, nothing survives the test of time. Certain drawings and odes were missing in the copies that survived.
However, the knowledge passed on in the form of ballads and legends among the general public.

Now the skies above Mondstadt are calm and blue.
Barbatos and Dvalin have found a new place to call home.
The atlas, meanwhile, has been entrusted to one worthy of the honor. 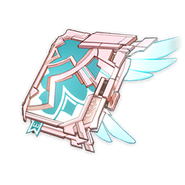 Retrieved from "https://genshin-impact.fandom.com/wiki/Skyward_Atlas?oldid=90055"
Community content is available under CC-BY-SA unless otherwise noted.