Dragonspine, Mondstadt
The Skyfrost Nail is located at Dragonspine's summit. Access to this area is unlocked during the World Quest In the Mountains. Attempting to access this area beforehand by scaling the mountain will cause a unique Out of Bounds reaction before the player is teleported away.

The area takes its name after the strange nail-like object that fell over the mountain from the heavens, freezing over the territory controlled by the ancient civilization of Sal Vindagnyr. 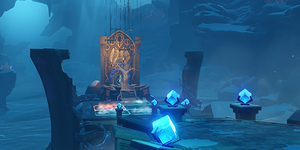 Thousands of years ago, the founders of Sal Vindagnyr fled a land of ice and snow, settling on the verdant mountain they named "Vindagnyr." The civilization flourished with the blessings it received from the heavens, and its people believed their prosperity would never come to an end.

However, years after the birth of the Princess of Sal Vindagnyr, tragedy would befall the nation. The "Skyfrost Nail" descended over the summit, blanketing the area in a blizzard. It would later fragment into three pieces, with one piece falling over and killing the Irminsul tree now known as the Frostbearing Tree. As life on the mountain withered from the inhospitable climate, the people of Sal Vindagnyr grew desperate. The outlander Imunlaukr headed off to parts unknown in search for a method to break through the ice and snow. The head priest, Varuch, perished during his last attempt to climb the summit and entreat the heavens for guidance regarding their predicament. The princess, too, perished when she attempted to revive the Irminsul tree by grafting it. The scribe, Ukko, could only watch as the once-prosperous nation lost everything, without any answer as to why they had befallen such a fate. By the time Imunlaukr returned from his mission, there was nobody left in Sal Vindagnyr.

Knowledge about this ancient nation was lost over the years, and attempts to uncover the mystery surrounding Dragonspine's abnormal climate met little progress before the Traveler's arrival. Over the course of the quest In the Mountains, the Skyfrost Nail is pieced back together, after which it ascends to remain aloft over the mountain summit. 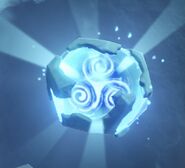 A Skyfrost Nail shard, with a triskelion symbol inside