This island has a unique charm that comes from its overlapping patchwork of mountains and waters, and from the elegant scent of tea that wafts through the air.

The following released soundtracks are played in the Silken Courtyard realm.

In addition to the above, another currently unreleased soundtrack can be heard during the daytime which is also played on Watatsumi Island.[1] 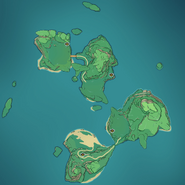