The shop is open at all times of the day and sells food, recipes, and ingredients. The frequency of the stock refresh varies. 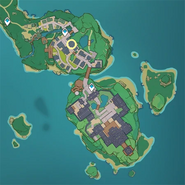 Shimura Kanbei used to be a samurai with very little money, until he realized that he still had not figured out who he truly was and that he "was alone in this world," which motivated him to start his business. The restaurant is managed exclusively by him, and he is in charge of all the cooking. He has a rivalry with Uyuu Restaurant.

Shimura Kanbei is an old man, nearly bald, save for some grey hair at the base of his head. He wears a maroon robe with a brown vest on top.

During Hues of the Violet Garden

Shimura Kanbei: How do you like it? The food's got that authentic flavor, eh?
Shimura Kanbei: Back in the days, I was just a poor samurai without a single dime to my name. I started Shimura's from the ground up. Every plank and every window here, I installed by hand.
Shimura Kanbei: I manage every ingredient, every sauce and every change in cooking temperature. It's guaranteed to be top-notch. Even Uyuu Restaurant can't compete with us!

You used to be a samurai?
Shimura Kanbei: Hmm? Oh yeah... But it's been decades. Nothing worth talking about.
Shimura Kanbei: I was too naive back then. I only thought of serving and dying for the cause, or building some track record, or becoming a Hatamoto.
Shimura Kanbei: I kept going until my hair turned gray and my parents were long gone...
Shimura Kanbei: At that point, I finally realized that I was all alone in this world, and yet I still hadn't figured out who I was supposed to be yet...
Shimura Kanbei: Thankfully, I still have this restaurant. I've been working at it for decades.
Shimura Kanbei: Can you imagine it? It took decades for me to realize that I'm more suitable to being a small business owner than a warrior.

What's up with Uyuu Restaurant?

Shimura Kanbei: Hmph, what about them? They've been just around a bit longer than us, have a little more staff than us and have classier decorations... Well, and the owner has a better background. That's all there is to their popularity!
Shimura Kanbei: I walked past that place several days ago, and they insisted on inviting me in. Of course, I knew they were just testing me!
Shimura Kanbei: My restaurant is just at the, uh, start-up stage! Just give me a bit of time, and I'll be better than them for sure!

Shimura Kanbei: Take care. Come back if you ever want more!

Hues of the Violet Garden

Shimura Kanbei: A few days ago, a handsome young fellow came here to eat. From the way he dressed, he was probably from Liyue.
Shimura Kanbei: But when I asked him if he was here to take part in the Irodori Festival, he shifted his gaze away, and he tried to divert the conversation.
Shimura Kanbei: That's rather odd.
Shimura Kanbei: Indeed. But he dressed so well. I don't think he could have been some sort of troublemaker...
(Continue non-event dialogue)