Inazuma
An island where some disaster seems to have occurred. Its center is consumed by an eternal storm.
Version 1.6 Special Program

Seirai Island (Japanese: セイライ Seirai-jima) is an area in Inazuma. 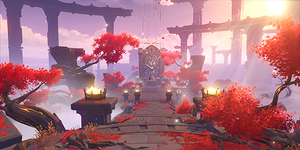 The Balethunder boundaries after completion of Seirai Stormchasers quests