3 Silver Sword
Schulz is an NPC in the City of Mondstadt. He is Wagner's apprentice and can be found at the Schulz's Blacksmith shop near the front gate of the city, wandering between different parts of the forge.

Following a certain dialogue branch for the first time will grant you three Silver Swords. 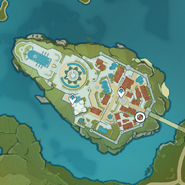 (During the Invitation of Windblume event)

Schulz: Looking to buy a weapon? You should talk to Wagner.

Schulz: Take your pick from this selection. All Master's own handiwork, so you won't find any second-rate items here.
(Opens wares)

(After completing "A Long Shot")
Schulz: *sigh* It's meant we've had a huge number of orders in from the Knights of Favonius... I was worried Master wouldn't be able to cope with all of them. So I tried to help out...
Schulz: ...But the ones I made... at best, they were blunt, and the worst one was so brittle that it broke on the first swing.
Schulz: Master gave me quite a scolding. "We can't give them junk like this," he said. "Not only does it put the customers at risk, it'll destroy my reputation."
Schulz: I came to my senses after that. He was right — some things you only make worse by rushing into them.
Schulz: I think I need a bit of hammering into shape myself, just like my swords do...

What are you doing?

Schulz: I'm an apprentice. Name's Schulz.
Schulz: Master's work is pure perfection. I never tire of watching him work.
Schulz: I usually help master out with odd jobs on the shop floor. Getting some down time, where I can just watch him work his magic, is reward enough for me.

Any of your own masterpieces to show me?

Schulz: I have tried... The results are usually less than perfect, though. Master normally melts them back down again and redoes them.
Schulz: There was this one I was quite proud of... But Master wouldn't let me sell it from his shop — said it'd damage his reputation.
Schulz: So I took it out the side gate and gave it a few swings. Ended up sticking it in the ground there.
Schulz: There's a group of kids who hang out over there, seems to have got them interested... Anyway, I digress.

Anything in the works yourself?

Schulz: Herman wants a sword for his daughter. I hear him talking about it all the time.
Schulz: He can't afford one of Wagner's, so I figured I'd make one for him myself, for free.
Schulz: I wouldn't call it an act of charity, it's not like my work is worth anything anyway.

How goes your forged blades? Are they worthy of battle?

Schulz: I am far from perfecting my craft, but the blades are better than before. They're still not sharp enough, though...
Schulz: Here, take these. They should serve well to protect you. Besides, I cannot give any of them to Herman...
Schulz: I must forge a far better sword, one deemed worthy of Mr. Herman's kindness.
(Obtain Silver Sword ×3)

Schulz: You'll have spoken to Wagner before I'm sure? Bit curt, eh?
Schulz: I'd be hard-pressed to find a better mentor though. Just look at the weapons he makes, a true testament to how hard he works.
Schulz: As long as there's mutual respect between us, I can't ask for more.
Schulz: To be honest, I think Master would get lonely without me here. Last time I took a trip back home, for example...
Schulz: ...Actually, never mind. Yeah... Don't bring that one up with Master.

Schulz: Alright. Swing by anytime you need something.

Schulz: Well, by the looks of you, I'd say you're an adventurer! Not going to stock up on some new equipment?

What do you have to sell?

(Dialogue response is the same as normal)

About the Windblume Festival and adventurers...

Schulz: A lot of couples will choose to have dates at Cape Oath, but there are some brave adventurer couples who will venture near Stormterror's Lair.
Schulz: That area is simply crawling with monsters, so many adventurers will come here to purchase new equipment...
Schulz: ...After all, if you were to be beaten by monsters in that place, you wouldn't just lose face - you'd be putting your companion in danger, too...
Schulz: So each time the Windblume Festival rolls around, we smiths run brisker business than usual, so I suppose we can be thankful for that.

Schulz: Take care, and make sure to enjoy the Windblume Festival!