Inazuma Local Specialties
A precious pearl that grows in the coral of Watatsumi. Gives off a cool sheen like that of the moonlight.

Found in the wild on Watatsumi Island and in Enkanomiya.

Sold by Yamashiro Kenta
These pearls only grow alongside the coral of Watatsumi, and they will emit a cooling sensation in your palm as gentle as a moonbeam.
Some local stories say that if held by a person in whose veins runs the blood of Watatsumi, these pearls will become brighter still, for these pearls are the blood that Watatsumi Omikami shed for its people. Other legends say that the great Omikami used a pearl as bright as the moon to shine upon Enkanomiya, leading the people who dwelt there up to the surface. As such, the Sango Pearls are akin to sacred relics to some.
The "pearls and waves" of the Sangonomiya emblem are said to come from these very waves that embraced Watatsumi and the bright gem that gave it light.

Sango Pearls are a Local Specialty of Inazuma found in the wild on Watatsumi Island and in Enkanomiya.

Sango Pearls are found among seashells and corals of Watatsumi Island and Enkanomiya. Many can notably be found in the reefs under the Sangonomiya Shrine, some are also present in Suigetsu Pool and in The Serpent's Bowels.

See the Video Guides section or the Teyvat Interactive Map for specific locations.

Additionally, the following NPCs give Sango Pearls after following a certain dialogue branch for the first time:

No recipes use this item.

2 Characters use Sango Pearl for ascension:

No Weapons use Sango Pearl for ascension. 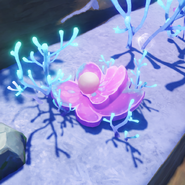