Liyue
Inazuma
Pushing Vacuum Field
A giant alien war machine.
They are said to be remnants from a lost ancient nation. Apparently, the creators opted to forgo the low-performing humanoid-design in pursuit of improved combat effectiveness. They are extremely dangerous both in melee and ranged combat. Considering these mere relics possess such extraordinary power, one cannot help but wonder — what must the civilization that produced them have looked like at its height?
Adventurer Handbook

Ruin Hunters are Elite Enemies that are part of the Humanoid Ruin Machines enemy group and the Automatons family.

Ruin Hunter locations can be pinpointed on the map by using the Adventurer Handbook.

Ruin Hunters are significantly faster and pack a stronger punch compared to Ruin Guards. To make up for this, they possess lower physical resistance, but it is still recommended to use elemental attacks against them. Note that while they are hovering on the ground, they cannot be disabled at all.

If too much time has passed or the player is at a higher elevation than it on ground level, the Ruin Hunter will enter Bombardment mode. This includes being airborne (e.g. Venti's held Skyward Sonnet), gliding, climbing, or being on drastically higher ground (or a Geo Construct). In this state, the Ruin Hunter's eye will glow brightly, turning it into a weak spot. Because it flies up even higher in this state, Bow and Catalyst users are the only ones capable of damaging it. The Ruin Hunter remains in this state unless struck in the eye or it uses its Quad Lasers attack, the latter signifying the end of Bombardment Mode.

Only one successful strike on the glowing eye is needed to bring it crashing down - a follow-up hit is not required as with the Ruin Guards. The Ruin Hunter will be disabled in a manner similar to Ruin Guards, but no protective rune appears after it recovers, meaning that Bombardment Mode can be abused to greatly weaken its offense.

When the Ruin Hunter is preparing to use its move Blade Slash, be aware that it only strikes at the last moment because it is aiming for a target, which means it can be dashed through easily. Drill Slash is particularly dangerous and must be dodged as it deals very high, if not outright fatal damage.

Ruin Hunters can be Frozen, so permafreeze teams that can repeatedly apply Frozen can be very effective. 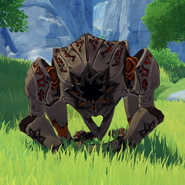 How to Easily Beat the Ruin Hunter