An old longsword that belonged to the erstwhile rulers of Mondstadt. Exquisitely crafted, the carvings and embellishments testify to the stature of its owner.

Royal Longsword is a 4-Star sword obtainable from Paimon's Bargains.

A longsword used by a noble who ruled over Mondstadt. It was crafted with premium materials and master craftsmanship.
For that reason, even after being passed down for generations, it is still as sharp as ever.
Swordsmanship was once a mandatory skill for the nobles.
However, it was for the purpose of refining wisdom and elegance, not for use in combat.
Unfortunately, wisdom and elegance were eventually all but forgotten. Swordsmanship became a mere formality.

Twenty-six hundred years ago was the era of Mondstadt's most ancient inhabitants.
They swore a solemn oath, after the new Anemo Archon descended and reformed the world:

No matter what future woes might befall Mondstadt, whether human tyranny or monster infestation, and even if that tablet is destroyed on which the oath of protection is written,
The oath itself will forever be borne by the winds, gently caressing Mondstadt like a doting lover, firmly defending Mondstadt like a loving father. 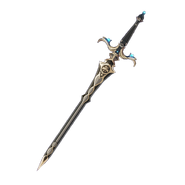 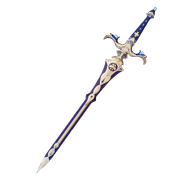