Geo Constructs
Exploration
Rock Piles are Geo Constructs that can be broken to reveal chests, cave entrances, and other items related to Exploration. They take a few different forms. Like all Geo constructs, they are most efficiently destroyed using Blunt Attacks.

The most common version is the Large Rock Pile,[1] appearing as a mound of round rocks, usually leaning against cliffs or obstructing hidden caves. Breaking it typically reveals a chest or another hidden object.

Another version of this object is the Small Rock Pile,[1] appearing as a player-sized tower of rocks, and are most often found in groups. Destroying all Small Rock Piles of an area typically reveals a chest.

While Elemental Sight is active, breakable rocks will be colored orange. 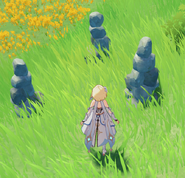 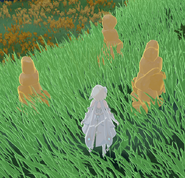