The Ritou Harbor Bulletin Board is a message board located near the entrance of Ritou, next to Kageyama. The messages randomly cycle through every time you interact with it. The first set of messages is replaced once Sangonomiya Kokomi's Story Quest, Warriors' Dreams Like Spring Grass Renewing is completed.

The Ritou Bulletin Board is a different message board also located in Ritou. Several messages are shared between these two message boards, particularly Arrest Warrants and notices from the Tri-Commission.

Ritou Harbor Bulletin Board: This Ritou Harbor bulletin board was set up by the Shogunate. Notices regarding all kinds of matters will be posted here. Do not post without authorization.

Arataki Itto vs. Kujou Tengu I

The Crux Fleet in Ritou Harbor

Message: "I've heard that a large fleet has arrived from Liyue, but I don't know where they are docked."
Message: "Their flagship is especially large. As long as the other outlander ships follow its mast and stay with the fleet, they won't have to worry about pirates..."
Message: "It's a shame. I've only heard about this fleet, but I have never seen it."
Message: "I've heard people say that this is supposedly the famous Crux Fleet."
Message: "It's just weird when I think about it: there isn't much business to be had during the Sakoku Decree, so why are they still coming here?"

Message: "The Ritou Harbor is too cautious in guarding against outlanders but too lenient with Inazumans."
Message: "As such, all you need to travel freely in and out of territories controlled by the Shogunate is a forged local document."
Message: "And it's not as if this is a difficult task."
Reply: What kind of idiot would post this sort of information on a bulletin board...

Kanjou Notice Board: To avoid congestion at the harbor because of the war, docking fees for outlander commercial ships have been increased fourfold.
Kanjou Notice: Please submit any feedback to the Kanjou Commission.
Kanjou Notice: Docking fees for commercial ships will be collected by the International Trade Association as per normal. No exceptions.
Message: "What do you mean, 'congestion at the harbor'? It's the soldiers who are occupying the harbor! And yet we have to pay for it..."
Reply: I am sorry, but leaving the harbor is free.

Kanjou Notice: All outlanders seeking to enter Ritou while the Sakoku Decree is in effect must provide valid documentation or they will be prohibited from landing.
Kanjou Notice: Prohibited items are not allowed in Ritou. Weapons, camping gear and foreign specialties must be registered for taxation.
Kanjou Notice: Please take care of your documentation and personal identification. They will not be replaced if lost!
Kanjou Notice: Anyone who has been in contact with the Sangonomiya must be put under surveillance in Ritou for one year and will not be allowed to leave.

Message: "Piracy is becoming more rampant lately. I've heard that soldiers from both sides of the war have fallen into banditry..."
Message: "Since outlander cargo ships are not protected by the Shogunate, they often become targets of opportunity. It's despicable..."
Message: "To our mariner friends who see this message, please stock up on supplies when leaving Ritou Harbor."
Message: "Weapons, fresh water, repair tools, spare materials, please do not hold back on the procurement of these items."

Message: "I wander like the autumn leaves that float to the mountains and seas afar."
Another message: "We're back! Come on, kid, give us another poem!"
Reply: This a bulletin board, not some kind of poetry forum!

Ritou Harbor Bulletin Board: This Ritou Harbor bulletin board was set up by the Shogunate. Notices regarding all kinds of matters will be posted here. Do not post without authorization.

Port Affairs Announcement: Yashiori Island's Jakotsu Mine has been closed temporarily, with representatives from the Shogunate and Sangonomiya discussing future development. It will be reopened soon after an agreement has been reached.
Port Affairs Announcement: Former miners from Jakotsu may claim job loss compensation from the Yashiro Commission estates and may also take the occasion to indicate preferred avenues of future employment.

Kanjou Notice: Former Kanjou Commissioner Hiiragi Shinsuke now awaits the Almighty Shogun's judgment regarding his crimes of high treason. Owing to his age and in acknowledgment of his past contributions, he is presently indefinitely detained without bail.
Kanjou Notice: However, should he commit any more acts of treason during this detention, he will be branded a public enemy of the Inazuman state and his judgment shall be enacted with extreme prejudice and without any mercy.
Kanjou Notice: While the Kanjou Commission debates the matter of his successor, the Commission's duties shall be performed by a personal deputy of Her Excellency.
Kanjou Notice: The duties of Kanjou Commission staff will not be adjusted. We urge all staff to remain calm and follow any arrangements sent from your superiors.

Kanjou Notice: The special privileges granted to Snezhnayan merchants in trade and in port affairs have been revoked. Any accumulated arrears must be paid within 2 weeks, or Ritou will not extend further protection to your goods and cargo.
Kanjou Notice: We ask all shipments of military equipment and materiel to leave the borders of Inazuma and Sangonomiya immediately. The Fatui and all related personnel are included in this order.
Message: "I am but a humble leather goods contractor for the Shogun's Army and have nothing to do with the Fatui. I only knew of the war through the financial statements I went through..."
Message: "I have also only just gotten my permanent business permit from the Kanjou Commission. Am I still to be chased out nonetheless...?"
Reply: We apologize for the inconvenience we have caused you, but please do leave within the allotted time.

Message: "I was often stuck doing lots of rear echelon work, so I never got to see the grand sights of Inazuma City. But today, I finally got my wish."
Message: "The locals here in Ritou were pretty restrained. I guess it's because not too long ago, we were still at each others' throats..."
Message: "But we were welcomed very warmly by the outlanders. Couldn't find one of their stores without discounts for us Watatsumi folk anywhere you looked."
Message: "Looks like our actions did have a positive impact on their lives after all... I'm glad that all the unfortunate things that happened so far were not meaningless after all."

Message: "Watching these 'traitors' who so often had to give back before us saunter and shop their way through Ritou..."
Message: "And thinking back on all the losses and pain that we suffered during this war... bitterness wells up within me unbidden."
Message: "Still, I suppose that surviving and being able to reunite with my family was a good thing in the end... This war has just taken so much out of us all."
Another Person's Message: "I'm not sure if I get to say this, considering that we were enemies..."
Another Person's Message: "But we've been given a new opportunity by this peace, haven't we? I hear that Uyuu Restaurant is pretty famous around these parts. Let's go get a drink there some time."
Message: "...Don't you act so familiar with me."

Message: "I came here to Ritou specifically to look for a Tenryou samurai who once gave me a sword wound on the battlefield."
Message: "I was going to thank him for not striking a fatal blow then and ask him for another duel."
Another Person's Message: "I hate to break it to you, but now that we are at peace, Her Excellency the Shogun has banned all duels with real swords save for duels before the throne."
Message: "Agh, come on! That's so boring! ... Ah, whatever. Let's just go get a drink or something, eh?"
Another Person's Message: "Speaking of drinking, I do know a good spot. Meet me at the docks later?"
Message: "Alright, that'd be great!"

Message: "While the war has finally ended, pirates still infest our waters, so be on your guard when you travel afar, friends."
Message: "I have heard that the authorities are presently in negotiations and that they might resume a cooperative security arrangement with Sangonomiya."
Another Person's Message: "That would certainly be for the best."

Message: "The Kanjou Commission has restored a few trade routes on a limited basis, even though this only brings in a meager income even for larger shops..."
Message: "On the other hand, the hard work of the supervisors from the Yashiro Commission has seen many exorbitant taxes canceled."
Message: "For our outlanders, our purse-strings will probably remain tight for a while yet, but at least we've got some room to breathe..."
Message: "Regardless, these changes are certainly for the better."

Message: "A friend who used to go out fishing together with me has returned. His time in the war seems to have left him very melancholy indeed."
Message: "Our neighbors have some reservations about him due to his having joined the resistance army, and have kept their distance for the most part..."
Message: "But it doesn't matter much to me. He's my friend and that's what counts!"

Message: "The very next day after the ceasefire came into effect, a ship from Sangonomiya arrived, claiming to want to purchase some lifestyle goods from Yae Publishing House."
Message: "I mean, that's what I heard, at least."
Message: "That said, I've got no clue what lifestyle goods they thought they'd get at a bookstore..."

Message: "The war is finally over. But rather than feeling joy, I think I feel something more akin to liberation, like a heavy burden was lifted off my back."
Message: "The supervisors that the Yashiro Commissioner sent have done their duties admirably, decreasing the merchants' burden by a fair amount..."
Message: "And while the Sakoku Decree has not yet been repealed, it seems that business has turned around... There's hope for the future now, and no mistake."

(Added after finishing Radiant Sakura)
Message: "Thanks to the efforts of various big shots, we can finally do business freely once again."
Message: "Many of our friends who'd lost confidence have gained it again, and those who went bankrupt have hope of regaining their liquidity."
Message: "I'd love to say more, but things are so busy..."
Message: "Whatever the case may be, to anyone who reads this message, I wish you luck in the coming days!"

(Added after finishing Radiant Sakura)
Message: "After the Sakoku Decree was abolished, trade activities have come to life — as has pirate activity."
Message: "Please remember to keep safe as you sail, and if you are attacked by pirates, please report it to the Tenryou Commission as soon as possible."
Message: "Let's avoid any unnecessary competition and convert our business opportunities into the greatest profits possible."
Message: "I'm all for it! Mora, here I come!" 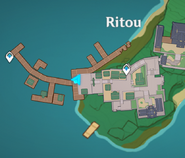