Enemy Groups
Whopperflowers
Mystical Beasts
Regisvines are Whopperflowers that have fed for a long time without interruption, their elemental properties are more refined but they lose the mobility their brethren had.

Regisvines take significantly reduced damage when they are active. When combat is initiated, the Regisvine's core will glow as an indicator of its weak spot. The core can be damaged with Physical DMG, but Elemental Reactions deal more. When the core is destroyed, the Regisvine will collapse and be inactive for several seconds, and its DMG RES lifted.

After recovering, the Regisvine will perform sweep attacks to force players away from it. This time, unstable elements will form on its corolla rather than its core as its new weak spot. It is dealt with the same way as the core; when the corolla has been destroyed, the Regisvine will be dazed again a second time. Hitting the corolla is significantly harder without relying on bow users, since the player has to attack whenever the Regisvine slams its head into the ground, but is still manageable.

The core will still regenerate if the player(s) take too long to destroy the corolla, in which case the corolla weak point is removed, but this is far slower than simply attacking the corolla in the first place. 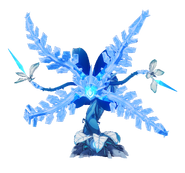 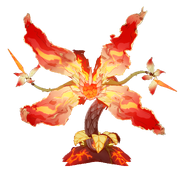