One of the outfits Diluc wears during covert actions, it resembles a flame dancing in the shadows.
The crimson red traces it leave behind at the edges of the enemy's vision will scar their nightmares forever.

During Version 2.8, Red Dead of Night was available at a limited-time discount of

Genesis Crystal ×1980. Thereafter, its cost will revert to

With the outfit equipped, Diluc still sports a black dress shirt, but swaps out his white vest for a light-gray or silver waistcoat with a silver phoenix insignia, that is adorned with a red gem in the eye. His dark brown overcoat is also swapped out for a red tailcoat with black undertones that sports four tails, reminiscent of the tails of his phoenix during his elemental burst animation. The tailcoat is also inlaid with silver insignias. His black trousers are similar in design, with the thigh straps now being silver and on the opposite leg, while his brown cuffed boots are replaced with knee-high boots that sport shin guards with a similar design to a Victorian plague doctor's mask. The gloves remain largely similar, except they now have red insignias above the knuckles and also sport finger chains. The wrist guards are also much larger and follow the same red and black color scheme as the tailcoat. Finally, his Vision cannot be found on this outfit, and the glow in the shape of the Pyro symbol that indicates his Elemental Burst is ready when he is switched to shows up on the left side of his chest at the front, just over the red gem in the phoenix insignia's eye.

As the eldest son of the Ragnvindr Clan and the youngest Cavalry Captain in the history of the Knights of Favonius, much was always expected of Diluc, who grew up surrounded by plaudits and applause. Even the carefree Knight of Boreas, Varka, praised him, calling him "the pride of the Knights."
This was a matter of great comfort to his father, Crepus, who hoped that Diluc would be more successful than him. Not only would he bring dawn to Mondstadt as a member of the Ragnvindr Clan, but he would also become an excellent Knight of Favonius, standing at the apex of the crowd, inheriting and passing its noble traditions down.
This expectation would bleed into their conversations, into training, and into every little detail of life, with the proud father even having a ceremonial uniform tailored for Diluc well in advance.
Yet, for Diluc, his father's praises and his life as a knight were extinguished forever on that gloomy, rainy night, and the ceremonial garment thus lost its purpose.
Many years later, the tragedy and the uproar had finally stabilized. Returning home, Diluc began his journey of "reckoning."
This was not merely for his father's sake, but also on account of the convictions he had suffered much to gain. He would protect Mondstadt in his own way.
The ceremonial uniform of yesteryear was modified to serve as new cladding for battle. The fabric itself was familiar yet had the feeling of long-separation, and Diluc privately treasured it.
"That's my boy." Looking upon the gem around the neck that reflected his red hair, he recalled his father saying that.
On silent nights, the edge hidden under the velvet glove of the noble princeling will be unsheathed to counter any threat. And wherever the blade passed, wherever the claymore's arc flashed, raging flames would arise and burn the hidden nests of villainy to the ground.
By the time the name of the Darknight Hero had become well known to the people of Mondstadt, the red so striking that it might sear the eyes had long become a thing of awe and terror to monsters and crooks alike.
"The true dawn has yet to come."
Contrary to his father's expectations, Diluc knew that he must instead be a "forerunner."

These are heard when equipping the costume.

This outfit features unique audio that replaces some of Diluc's story voice-overs and combat voice-overs. 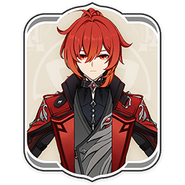