A primordial crystalline gem that's beyond the mundane world. Shines with the condensed hopes and dreams of universes that once were.

Blessing of the Welkin Moon

Trust Rank
Primogems are the premium currency in Genshin Impact.

Primogems can be used to

You can also obtain Primogems by converting them from Genesis Crystals, however note that you cannot convert it vice versa. 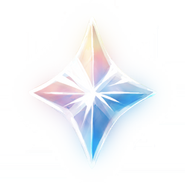