Given via the Mail on PS4/PS5 between Version 2.1–2.2, obtainable on PC/Mobile via cross save

A uniquely designed bow. This should not belong in this world.

Predator is a bow only obtainable on PlayStation to those who log into Genshin Impact during Version 2.1 or 2.2. The maximum refinement level is one as only one copy is given, similar to the Sword of Descension.

Players on different platforms can obtain the weapon by obtaining it on PlayStation and then activating the cross-save feature. However, its passive effect (Strong Strike) will not activate outside of PlayStation.

The Blacksmith who accepted the commission asked why this order had to be made this way and why it had to be named like this.

The blacksmith understood quickly enough, though. So this bow was some powerful weapon used to hunt and kill these mighty machine creatures, and so it was the apex predator of that world.

But the strange girl corrected him.

She was just going to use this to hunt wild boars next, since it appeared that in this world, using bows and arrows to hunt would actually allow one to harvest Raw Meat. 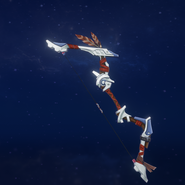 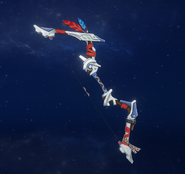 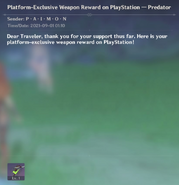