Perpetual Heart
Invincibility Frames
A strange, alien machine.
They say that it is a war machine left behind by a nation that has already been destroyed. Composed of several different parts, it can adapt to its combat environment and employ a variety of attacks. This machine, comprised of cubic shapes, is on some level very much like the elemental hypostases.
Adventurer Handbook

The Perpetual Mechanical Array is a Normal Boss challenge found in Narukami Island, Inazuma. In order to access the boss, the player can enter through a portal on Jinren Island. A faster route is unlocked through a Teleport Waypoint next to the boss; this requires completion of the Araumi section of Cleansing Defilement.

The boss uses a wide array of attacks, most of which are fairly easy to dodge. As an Ruin Machine enemy, the boss is highly resistant towards Physical DMG and can be more efficiently fought with Elemental DMG.

While performing its Energy Cannon attack, the boss is unable to turn and only attacks in a forward arc. Running past/behind it will interrupt its attack.

As the fight progresses, the boss will eventually assume Defensive Mode, summoning four Ruin Sentinels - one each of a Scout, Defender, Destroyer and Cruiser. One of these four sentinels will be highlighted with runes and the game will inform that this Ruin unit will need to be disabled to end the boss' Defensive Mode. The boss does not attack in this state.

The Ruin Sentinels share the same level as the boss and apart from the glowing runes, the targeted Ruin unit shows its level and health bar - the others do not. There are no other differences between the boss' Ruin Sentinels and those found elsewhere. Once the targeted Ruin Sentinel loses all of its health, the boss breaks out of Defensive Mode and will be paralyzed for 20 seconds alongside all the Ruin Sentinels. During this time, the boss's base resistances to all DMG is lowered by 50%, so dump as much damage as possible. When the boss recovers from its dazed state, it will become briefly invulnerable for a second before pulling the sentinel cubes back in.

The attack pattern resets and remains this way until the boss is defeated. 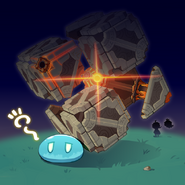 How to Easily Beat the Perpetual Mechanical Array

The water near Jinren Island is undulating violently, while an unpredictable automaton is hidden in the ruins underneath...
Destroy the Perpetual Mechanical Array at the bottom of the sea and pre-empt the attack of the Ruin machines!