View source
watch 02:56
Raise a Floppa - The Loop
Do you like this video?
Play Sound
This article is about the furnishing. For the fish, see Moonfin.

A valuable Ornamental Fish that may be kept as a pet in the Pool of Sapphire Grace.
A rare butterflyfish that emits light admits the pitch-dark ocean. They love to swim in schools, and when gathered together, they firm the image of a moon that has fallen into the sea, which is the origin of the "Lunar Leviathan" legend. This characteristic once attracted a great number of light-seeking creatures, and in some sense, also guided people who had descended into the darkness.
Moonfin is a type of Ornamental Fish. They can be raised as pets in the Serenitea Pot's Pool of Sapphire Grace. A maximum of 5 Moonfins can be obtained during the Lunar Realm Event. 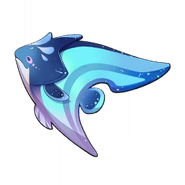 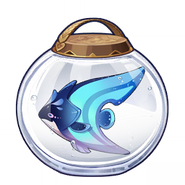