Inazuma Local Specialties
A strange beetle that inhabits areas rich with Electro energy. Its docile and sedentary temperament could not be more different from the fierce, demonic visage displayed on its armored shell.

귀신풍뎅이 Gwisin-pungdeng'i, "Ghost Scarab Beetle"
A strange beetle that inhabits areas rich with Electro energy. Its docile and sedentary temperament could not be more different from the fierce, demonic visage displayed on its armored shell.
Inazuman folktales say that when the gods were apportioning territory to the many animals, the onikabuto, who detested conflict, chose first to live in lands saturated in Electro. As many years passed, it evolved bizarre patterns with which to frighten trespassers and developed horns that could release electricity to deter predators. Yet though it wears armor and bears horns, the onikabuto hates fighting most of all animals.

Onikabuto (Japanese: オニカブトムシ Oni Kabutomushi) are a Local Specialty found in the wild in some areas of Inazuma.

Onikabuto are found lounging on trees and rocks in areas of high Electro concentration on Narukami Island, Kannazuka and Yashiori Island; many can notably be found near Mikage Furnace and around Mt. Yougou.

Additionally, the following NPCs give Onikabuto after following a certain dialogue branch for the first time:

There are 1 items that can be crafted using Onikabuto:

No Characters use Onikabuto for ascension.

No Weapons use Onikabuto for ascension. 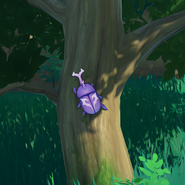