They are creatures created by the coalescence of filth that appear as samurai. Their forms are often swayed by the thought and memories of the times.[1]

They are infused with either Pyro (Cankered Flame) or Electro (Ensorcelled Thunder).

Ochimusha are the same as Kairagi and are dealt with the same way. With the exception of one Sword Hilt puzzle, all Ochimusha are fought alone, although the one in Higi Village also has a Kairagi: Dancing Thunder at the spot. 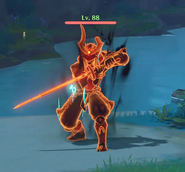