A national treasure of Byakuyakoku stored in the Dainichi Mikoshi. With the coming of the Serpent God, this item was used to notarize great oaths and wishes.

Oathsworn Eye is a 4-Star Catalyst obtained from the Three Realms Gateway Offering Event by upgrading the Bokuso Box to Level 4.

Refining Oathsworn Eye requires Ointment of Sight instead of an identical weapon. Ointment of Sight can be obtained from the Three Realms Gateway Offering Event by upgrading the Bokuso Box to Levels 5, 9, 10 and 14.

"You wish for me to become your deity?"
The giant white snake gazed down at the child standing before him.
"It was because I could best neither the golden god[Note 1] nor Narukami that I elected to flee into waters unknown."
"If you keep seeking the light, you will experience loss in the future."
"My life is worth nothing. I've had enough of it all — of eking out this existence, of being shamed for blasphemy."

The giant serpent then showed forth a jewel that glimmered like snake-eyes.
"In that case, swear it upon this eye."
"This was also how I made a pact with my coral servants."

"Have you forgotten Master Spartacus' teachings?"
"We must never worship a god! We can only rely on ourselves!"
The white serpent said nothing, for it respected the will of the people dwelling in the depths.
If vain worship was supplanted by new belief,
Then would it not dishonor those who fought?

"I'll swear it. I'll swear it here, before this eye."
"All is as it was when I lost everything."

"The years have passed swiftly. The island is complete. The vishaps are repelled, and the Holy Soil may now be governed."
"House of Sangonomiya, gathered Jibashiri, and my vassals — the oath sworn upon the eye has come to fruition."
"From today, if two or more parties should be dissatisfied with the arrangement concerning Enkanomiya, or should you decide otherwise than you first did,"
"May the tower of the sun hear your wishes and collapse of its own accord, destroying all that was once your past."

Saying these final words,
The serpent god took the remaining people to the surface.
It was time to fulfill his oath to the heavenly city... 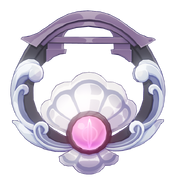 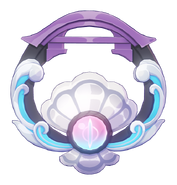