Patton
Nora is an NPC in the City of Mondstadt. She can be found running around the plaza in front of the Favonius Cathedral. She is the daughter of Patton. 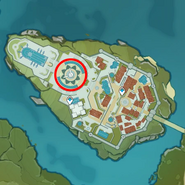 In Venti's Story Quest, "Should You Be Trapped in a Windless Land", Nora is seen playing with her imaginary friend.

During A Child's Secret

Nora: What's this? You want to play with me?

(After completing The Outlander Who Caught the Wind)
Nora: Daddy said that Stormterror must have come because I wanted to climb up the god's statue...
Nora: I'm sorry! I won't ever climb the god's statue ever again... *sobs*
Nora: Lord Barbatos, please don't be angry... *sobs*

Where are your mom and dad?

Nora: My dad is Patton!
Nora: He's at that place where all the drunken uncles go.
Nora: Dad has a busy job, so I play by myself a lot.

Hey kid, what are you doing?

Nora: I like playing by the god statue!
Nora: It's so big and so pretty.
Nora: Have you ever climbed to the top? I tried to climb it once but got told off by Grace.
Nora: Grace is a nice lady, I don't want to make her mad again.
Nora: But if you go up there, I wanna hear what the view is like!