In the old language of Inazuma, "Nazuchi" means "to be caressed by the loving hands of the divine."
However, this shallow shoal has seen far too many battles and slaughters during its time.

In the ancient language of the Inazuma ancestors, "Nazuchi" means "to be tenderly caressed by the hands of the gods." Ironically, Nazuchi Beach has been ravaged by war since a thousand years ago and has become a place for scavengers and pirates, with few inhabitants.

A beach connecting Kannazuka and Yashiori Island, Nazuchi Beach has been ravaged by war for almost a thousand years. In recent years, it has been a place of interest for both the Tenryou Commission and Watatsumi Army, with weapons scattered all over the place. Both ground and naval engagements have taken place here, and third-party affiliates such as criminals have made the area a prime spot for looting what remains on the battlefield.

Note: The Pirate's Diaries are simply labeled "Pirate's Diary" in-game; the numbers labeled below are for wiki convenience and does not necessarily reflect their actual relative chronological order.

This is found near the Pirate's Note, in some ship ruins.

Pirate's Diary: (This diary looks newer. Perhaps someone took it as spoils of war.)
Pirate's Diary: "...Most of the Shogunate samurai stragglers wandering across the island have been dealt with. We need to use them to send a warning to the others..."
Pirate's Diary: "...We should mark our borders with their personal effects. That'll show those Shogunate numbskulls that they shouldn't get too close..."

This is found on the land in the southeastern side of ship ruins, below the teleport waypoint.

Pirate's Diary: (This old diary seems to have seen a lot of use. It's full of traces of wear-and-tear.)
Pirate's Diary: "...A miner came here, and he looked awful. We let him stay here for a few days and he recovered decently..."
Pirate's Diary: "...It seems that his wife and his son are still on the island, but he rejected our offer to help him find them. Instead, he thanked us and just left. What a strange man..."
Pirate's Diary: "...Brother Takano has a high fever that won't abate. Many of us have been awakened by nightmares in the middle of the night. Everyone's on tenterhooks, and we're not feeling too great. Is it a seasonal thing?"

This is found near the Pirate's Note on a rock, in the same ship ruins.

This is found on the west side of the big ship ruins on a rock. 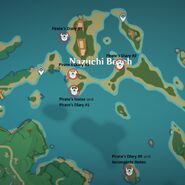