Minlin, Liyue
A strange tree whose branches flow with clear, cold moonlight. Perhaps its roots, that reach deep into the heart of the earth, are connected to something that awaits an opportunity to once again emerge and bask in the moon's light.
Moonlit Tree

This region notably features the Dragon-Queller, a large tree used to seal Azhdaha, whom Jiu worships. The dragon has begun merging with the tree, using its roots to connect to the ley lines and draw power from them.

At the tip of the tree is a large blue branch, which points directly towards Liyue Harbor. That portion of the tree also cannot be climbed on. 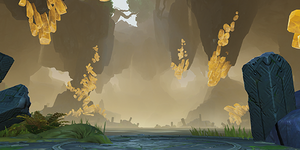 Stone Monolith: "Life endures in Heaven and Earth thanks to the merciful Adeptus. On this site lies an evil dragon, please do not disturb it."