Genshin Impact Wiki
Register
Don't have an account?
Sign In
Advertisement
in: Characters, NPCs, NPCs with rewards,
and 3 more

1 Harbinger of Dawn
Nanako (Japanese: 菜々子) is an NPC located in Inazuma City, Inazuma. She can be found at all times outside the Dojo.

Her dialogue changes after completing A Swordmaster's Path Is Paved With Broken Blades, and following a certain branch of this dialogue will give the player a 3-star Harbinger of Dawn. 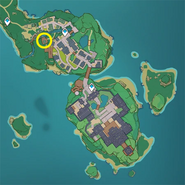 Nanako is a young swordswoman, currently being trained to master Meikyou Shisui Arts under Domon alongside Junya.

Before completing A Swordmaster's Path Is Paved With Broken Blades

After completing A Swordmaster's Path Is Paved With Broken Blades

(Before completing A Swordmaster's Path Is Paved With Broken Blades)
Nanako: Huh, who are you? Are you just here to watch my master's humiliation?

Nanako: I'm a disciple of the Meikyou Shisui Art. My master's name is Domon.
Nanako: My master used to be a great swordsman and a Vision-wielder. He will become the best in the world one day!
Nanako: However, my master has been very out of sorts after losing his Vision due to the Vision Hunt Decree. I don't know what to do...
Nanako: My parents were murdered by pirates when I was little, and I was almost killed as well. If it hadn't been for my master, I would have been dead a long time ago.
Nanako: I will never find a way to repay him fully. Now that he's in trouble, I have to find a way to help him get back on his feet...

Nanako: No, I can't give up yet. I need to figure this out somehow...

(After completing A Swordmaster's Path Is Paved With Broken Blades)
Nanako: It's you, Traveler. Long time no see!

Nanako: Thanks to you and Guuji Yae, my master has returned to normal again. He has been teaching us swordsmanship every day, and there's hope in his eyes again.
Nanako: As his disciples, we shall also work harder to fulfill our goal of becoming the greatest swordsmen.

Keep up the good work.

(After completing Omnipresence Over Mortals) [verification needed]
Nanako: Yup! With your encouragement, I'll definitely become strong!
Nanako: That reminds me. Recently, when I was training in the dojo, I discovered a foreign-looking weapon. Did my master study it to hone his martial arts...?
Nanako: Even if we kept it here, not many people will know how to use it. If that's the case, how about I give it to you? You came from another lands, so I think you'll be able to draw out this sword's true potential.
(Obtain 3-star Harbinger of Dawn ×1)

Nanako: Bye! I should be getting back to practice, at any rate.