This island can be travelled to via a time tunnel, the bluish-purple portal, found at Cape Oath. Arriving at the island via the Time Tunnel grants the achievement Initiating Warp Drive! 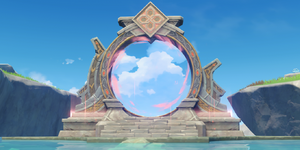 Before Barbatos became the Anemo Archon and reshaped the region of Mondstadt 2,600 years ago,[1] Musk Reef was part of the main continent and the summit of a great mountain. During this time, it was known as Pilos Peak. The adventurer Leonard attempted to reach the summit but failed, as recorded in his journal Of Mountains and Seas.[2]

Leonard died before being able to achieve his dream, and Mondstadt was terraformed when Barbatos used his wind to blow the snow and ice off the land. Pilos Peak was swept off its original location, while the snow and ice melted and formed the ocean. As a result, the tall mountain peak was transformed into the island of Musk Reef.[2]

Some 2,000 years later, during the Unreconciled Stars event, his constellation was summoned down as meteorites that sent those who touched it into a deep sleep. In their dreams, the victims were compelled to climb towards the summit, driven by the long-dead Leonard's dream. The meteorite core, which contained the greatest elemental energy as well as Leonard's will, fell on Musk Reef. After fighting off the Fatui that went to investigate it as well, the Traveler and Mona destroy the meteorite core and put an end to the dreams.[2]