He comes to the city once a year to offer incense to Rex Lapis. In the past, he was rescued from bandits by Xingqiu. 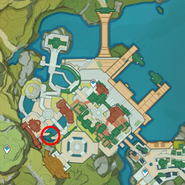 Musheng: Are you an outlander? Would you like to burn an incense stick?

(After completing Rite of Descension)
Musheng: How could a divinity like Rex Lapis die? Even though I witnessed it myself, I can't believe it.
Musheng: He must've just moved back to Celestia. I mean, many of his old adepti pals are still there, right?
Musheng: As for Liyue, I'm sure he's made thorough arrangements... Why, you ask?
Musheng: Well, I've lived in my hometown for several decades now, and I sure did miss home a few times while I was here for the Rite...
Musheng: Rex Lapis has been with us for thousands of years... I'm sure he'll miss us, too.

Musheng: I live in the countryside. I visit the city once a year at this time to burn incense as an offering to the Geo Lord.
Musheng: Everyone in Liyue is into things that bring good luck. I'm no different.
Musheng: Were it not for the Geo Lord's power, Liyue would not be as prosperous as it is today. That is why I come here every year to pay my respects at this temple, no matter how long the journey is and no matter what other pressing business there is to attend to.
Musheng: As the saying goes, "None shall learn what the immortals have in store for them until he first does that which is within his power as a mortal."

About Rex Lapis' protection...
Musheng: Huh. Judging from your tone, you're not a believer, are you?
Musheng: Well, just a short while back, I was set upon by bandits on the road to Liyue Harbor. It was only by the intervention of a young hero named "Xingqiu of the Guhua Clan" that I was saved.
Musheng: This must have been the protection of Rex Lapis! He must have known that I was coming to offer incense, and thus stepped in to rescue me!
Musheng: Were it not for Rex Lapis' divine arrangement, how could a long-lost Clan like Guhua suddenly return out of nowhere?
Musheng: However you want to put it, I thank Rex Lapis. I shall also offer incense on behalf of that young hero of the Guhua Clan. I will pay for his fortune and safety, as repayment for his deeds.

Musheng: I will stay around in the city for a bit longer. It will be much more effective if I let the scent of incense permeate every inch of me...

Musheng: I'm Musheng, I come from out in the country. There's definitely more of a festive atmosphere in the city.
Musheng: The heroes that we remember during Lantern Rite are actually adepti who lived in Liyue in the distant past.
Musheng: That was a time when the adepti lived among the normal people. I don't know why we never see any adepti nowadays...
Musheng: I can't help but think it's a bad omen... Ah, what am I saying? I shouldn't jinx the festival, should I? Haha.

Musheng: Haha! It was the right call to come here during the festival. You just can't beat the festive cheer here in the city!
Musheng: I've heard that the Moonchase Festival used to be celebrated for very different reasons in the past. Something about the adepti's rituals, I believe.
Musheng: But I don't think that what it's about now — gathering together and admiring the moon — is half bad, either!
Musheng: I'm sure that the adepti, too, would be gladdened to see everyone enjoying themselves.