Mt. Tianheng (Chinese: 天衡山 Tiānhéng-shān) is a subarea in Sea of Clouds, Liyue. 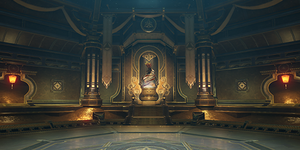 Near the Teleport Waypoint south of Guili Plains exists a puzzle that involves two Anemo Monuments and a Pressure Plate. Activating both Anemo Monuments before they deactivate spawns a Precious Chest.

One monument is located on the upper floor of the ruin, while another is located underneath. The pressure plate opens a gate that allows players to quickly move between floors. It is possible to complete this puzzle in Co-Op Mode or, for solo players, use a character whose construct can activate large sensors (see list), run upstairs, activate the Anemo Monument, jump down from the opening in the floor, and activate the lower Monument.

Southeast of the ruin are six Geo Monuments arranged in a circle, five of them surrounding one more in the center. Activate the monuments according to the spiral of flowers surrounding the area. When this happens, an Eye of the Storm will spawn and attack the player. Defeating the monster will spawn a precious chest.

Morax raised Mt. Tianheng when he first descended upon Liyue, and there people congregated to mine ore from the mountains. These people then established Shanhui Fort (Chinese: 山辉砦). Guizhong and her people would eventually move to the plains north of Mt. Tianheng, allying with Morax[1] and Marchosius to create the Guili Assembly.[2] Guizhong and some adepti built the Guizhong Ballista to defend Tianheng Pass from external threats.

It is said that during the Archon War, a clash between Morax and another god nearly toppled Mt. Tianheng. The adeptus Skybracer sacrificed his antlers — bestowed on him by Morax's power and containing divine power — to prop up the mountain, making it even taller than before, then continued to fight until he died of blood loss and exhaustion.[3]

Yan Jiang, Level Artist: The sole path to Liyue Harbor is the entrance of Mt. Tianheng, which was inspired by Tianmen Mountain. Therefore, there is a certain sense of ceremony while you make your way up there. After entering Mt. Tianheng, you unexpectedly find yourself in the trade capital that is Liyue Harbor; such a strong visual and spatial contrast allows Liyue's rich natural and man-made elements to stand out even more.