It is the home of the Adeptus Cloud Retainer. 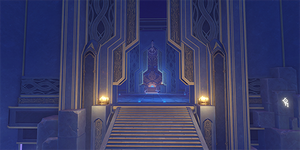 Read: "Tranquility of mind and purity of heart — the Free Adeptus, The Unfettered — performs no action and sets no rule. Their presence is beyond mere mortals."

Near the Clear Pool and Mountain Cavern domain is a Ruins Treasure. From a distance, you can see a pillar of light above it. This ruins treasure is related to the one in Guyun Stone Forest, and tells the story of the disciple who received a Vision.

My fellow disciple and I trained in the martial arts from childhood. Our quest was to fight the forces of evil and protect all that is sacred in this world. But this was no easy task without the aid of a Vision.
We two sought refuge here to train ourselves further and to seek the Visions that we desired. We erected this monument in testament to our endeavors.

Visions... They truly hail from a realm beyond. People say that they are a gift from the divine, but none can say who will receive one and why.
Ancient texts hold that the divine looks down with compassion on the mortal realm, and bestows Visions upon the worthy to help them fight against evil and protect the world. But I... I no longer burn with a desire to banish monsters. I just want to communicate with them. To understand them.
This Vision... It is of no use to me.

I was fortunate enough to receive my Vision. But still, there was doubt in my mind: Is it truly within the power of mere mortals to one day cleanse the world of the monsters that have long plagued it? And how different from mankind are these monsters to begin with, save in outward appearance? Is it not so that just like us, they, too, speak; they, too, build; and they, too, feel love and hate, joy and grief...
I hereby inscribe my mind's greatest perplexion onto this monument. O, reader in the far-flung future, will you be the one to resolve this riddle?

Are monsters truly evil by nature?

Yes
Are mortals and adepti truly good by nature?

Yes
We who would protect our way of life, are we but making blind judgements on good and evil based on what our small minds can conceive?

Your answers to the above will affect whether you must fight for the Exquisite Chest or not.

(Interact with the Ruins Treasure again, No Fight)
Future reader, I know not whether you bear the answers to my questions.
Anyone who reads these words must surely be of the same nature as I.
If it is of interest to you, I have buried what few treasures I own by the pool. Retrieve them with my blessing.
But please never forget these questions three. I pray that there will come a day when you are equipped to answer them.

(A fourth Ruins Treasure spawns in the middle of the lake)

These preceding questions three, I approached my fellow disciple and asked them of he. But he chastised me, accusing me of abandoning my duty, and marched off furiously. May the true answers to these three questions bring peace to the world. In my time, I have sought the wisdom of ancient texts from all corners of the world, I have hidden myself here in quiet meditation, and I have studied the language of monsters; all this I have done in the hope of understanding their true nature. I erect this monument to be my witness when the one comes who can resolve these questions once and for all.

(Traveler): Monsters wreak havoc all across this world, and we who seek to protect it would do well to remember: Monsters deserve nothing more than the merciless slaughter they will get!