View source
watch 02:34
Fire Emblem Warriors: Three Hopes - The Loop
Do you like this video?
Play Sound
This article is about the region. For the city, see City of Mondstadt.

Mondstadt[2]
Mondstadtian*[3]
A city of freedom that lies in the northeast of Teyvat. From amongst mountains and wide-open plains, carefree breezes carry the scent of dandelions — a gift from the Anemo God, Barbatos — across Cider Lake to Mondstadt, which sits on an island in the middle of the lake.

Mondstadt (German: Mondstadt "Moon City") is one of the seven regions in Teyvat, and the first in which the Traveler starts to look for their lost sibling. It is the city-state that worships Barbatos, the Anemo Archon.

Ever since the beginning, Mondstadt has celebrated a festival called the Ludi Harpastum every year, with 15 days of games for the children to enjoy.

Before completing Archon Quest Prologue: Act I - The Outlander Who Caught the Wind, only small parts of Starfell Valley, Galesong Hill, and Windwail Highland are accessible.

The Archon Quest Prologue: The Outlander Who Caught the Wind takes place in this region.

The dragon who defended Mondstadt for a millennium finally faces his perturbation. What does freedom really mean, when demanded of you by a god? 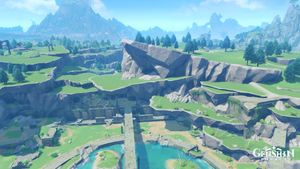 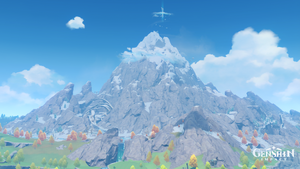 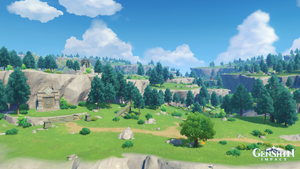 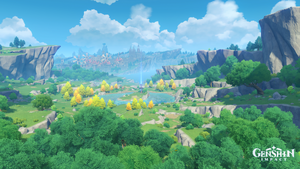 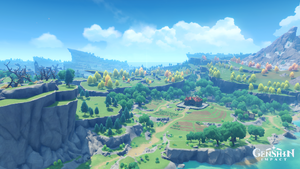 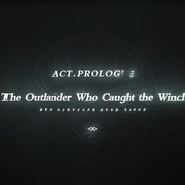