미유키 Miyuki
Miyuki (Japanese: 幸) is an NPC initially located in Kujou Encampment, Inazuma, where she starts the Tatara Tales World Quest Series. She then moves south, and can be talked to again to start the "Sakura Arborism" World Quest.

After both quests are finished, she moves to the back of the Grand Narukami Shrine.

Miyuki's location south from Kujou Encampment, where you can start the Sakura Arborism World Quest. She can appear here after completing Tatara Tales (Quest) (the first part of Tatara Tales). 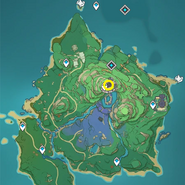 Miyuki is one of the shrine maiden of the Grand Narukami Shrine. The Traveler first meets her during the Mikage Furnace incident where she is seen arguing with Toranosuke of the Tenryou Commission about the jurisdiction over the crisis. Toranosuke questions why the Shrine is interfering with the Tenryou Commission and views the halt of metalwork production as the most critical issue as it is damaging the Shogunate's war effort. Miyuki reveals to Toranosuke that the Tatarigami's influence in Tatarasuna has grown to the point that it is affecting the Sacred Sakura and the Thunder Sakura around Inazuma and that Lady Miko sent her to exorcise the Tatarigami because the Tenryou Commission was not doing their job properly. After the Mikage Furnace incident, the Traveler meets her again in Kannazuka where the Traveler helps her with her mission to heal the Thunder Sakura. After resolving the issue with the Thunder Sakura in Kannazuka, she returns back to the Shrine where she is waiting for her next instructions from Yae Miko.

Miyuki is described as a "considerate and capable young lady" by Xavier and takes the honor of the Grand Narukami Shrine seriously in order to not disappoint Yae Miko. She has a fixation with Lady Yae and works hard to earn her approval, even saying that the day Lady Yae praised her after completing the mission in Tatarasuna was the happiest day of her life.

Miyuki: That's the only reason Lady Miko sent me out here. To exorcise it.

Miyuki: Damage to the Thunder Sakura brings dishonor to the shrine. We urgently need to get to the bottom of this.

Miyuki: Hi there, you can come to me if there's anything you need help with.
Miyuki: I have to work harder in my duties as a shrine maiden to earn the approval of Lady Yae, after all.

What are a shrine maiden's duties?

Miyuki: Our duties are obviously to obey the commands of Lady Guuji Yae!
Miyuki: I will do my best to complete any instructions Lady Yae gives me, just as I did in Tatarasuna. I won't ever let her down.

About Tatarasuna...
Miyuki: The problem with the Mikage Furnace has been resolved thanks to your help. You have my gratitude.
Miyuki: I've never worked in a place so far away, and I heard many interesting stories along the way.
Miyuki: It's said that the Sangonomiya troops are actually led by a shrine maiden. I never thought that a shrine maiden would be able to command a battlefield at the frontlines...
Miyuki: I wish I could meet her, I'm quite curious as to what she's actually like...

Miyuki: Yes! Lady Yae praised me after I completed my mission in Tatarasuna. That was the happiest moment of my life!
Miyuki: That's why from that day on. I've decided to work even harder to serve Lady Yae. I want to become a shrine maiden whom Lady Yae can count on even more than Kano Nana!
Miyuki: *sigh* I really don't understand why Lady Yae and Kano Nana are so close. She even shares her secrets with her...
Miyuki: Hmph. I mean, I can outperform her in many ways, for sure!

I'll not bother you. Goodbye.

Miyuki: *sigh* So you don't need any help?
Miyuki: Alright then, I guess I'll keep waiting on Lady Yae's instructions...