According to Albedo, the main island used to be a mountain from Mondstadt, before it was ripped away and landed in the sea upside-down.[1] The island features Inverted Ruins as well as Dandelions and various Anemo enemies like Anemo slimes and an Eye of the Storm, which coincides with Mondstadt being the nation of Anemo. Moreover, there is a portal leading back to Mondstadt as part of the quest The Winding Homeward Way.

Nearby the island with the Teleport Waypoint, there is a locked chest by a Pyro Monument and a Cryo Monument. To light, use Pyro and Cryo skills respectively. It suffices to use Amber's Baron Bunny and Kaeya's Elemental Skill to light them up to unlock the chest.

There are three Hymnal Rings challenges on the island. The first involves rotating two rings so that the Harpastum hits its target, located near the teleport waypoint. A second challenge is located directly south of the teleport waypoint, where a Harpastum needs to drop directly onto the target below near the base of the cliff. East of the Inverted Ruins area, the last Hymnal Rings challenge involves a reprise ring.

There is a Windmill Mechanism at the bottom of the Inverted Ruins area. Activating and riding it will bring the player to a Chest that rewards Primogems.

At the top of the southwest part of the island there will be a Seelie. Following it will start the quest The Winding Homeward Way, which involves lighting Elemental Monuments to activate a portal back to Mondstadt, where one can obtain a chest.

There will also be a mural that the player can take a photo of to obtain the Minacious Isle Mural.

After completing Dodo-King of the Sea: Lying in Wait, The Echoing Conch (An Archon's Deeds) can be collected at the northwest part of the main island. Albedo could also be found near the Teleport Waypoint at the top until the end of Midsummer Island Adventure.

Most of the island will be covered by a giant energy shield. There will be 1 Teleport Waypoint and 1 Waverider Waypoint on this island.

After completing Dodo-King of the Sea: Lying in Wait, Kaeya, Jean, and Klee could be found and spoken to on this island until the end of Midsummer Island Adventure.

After completing the quest The Final Riddle: A Secret Uncovered, the energy shield is gone. A special Crafting Bench also becomes available for players to craft Harpastum Bombs.

Located in the far west of the map (further west of the island with the energy shield) is a small island with a cave. Use the Harpastum to break the painted wall and then break a Rock Pile to access 1 Echoing Conch (Fog and Exit).

Directly west of the main Minacious Isle, there is a small island next to a whirlpool surrounded by small bubbles. Approaching the whirlpool will transport you into a cave.

(Enter the whirlpool nearby)
Paimon: So, that whirlpool leads here. But it was a one-way trip...
Paimon: Let's see if there's another way out.

(Observe the first stone tablet)
Eroded Stone Tablet: "...this observation point is perfect for conducting astronomical research..."
Paimon: Astronomical observation, huh? It looked like just a regular cavern...
Paimon: There's so much water around here. What is this place?

(Observe the second stone tablet)
Eroded Stone Tablet: "...the margin of error in my observations here is too large, it seems I must find another observation point..."

(Observe the third stone tablet)
Eroded Stone Tablet: "...perhaps around 01:00 AM would be the optimal window of time..."

(Activate the pressure plate at the appropriate time)
Paimon: That window opened! But we still need to find a way outta here.
Paimon: ...Wait, that's it! If the water keeps rising, it'll take us up there!

(Upon leaving the gated room)
Paimon: We made it out... But the room in that cave is probably filled with water now.
Paimon: Why would there be a place like that underwater? So strange.
Paimon: Anyway, we should probably think about all this after getting back to shore... 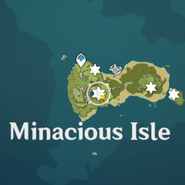 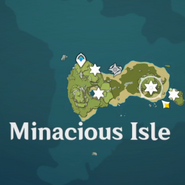 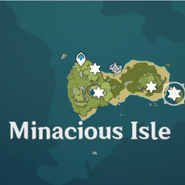 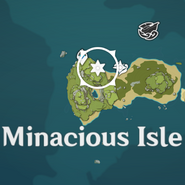