View source
watch 02:17
New Pokemon Games - The Loop
Do you like this video?
Play Sound
"How about we explore the area ahead of us later?"
This page contains unmarked story spoilers. Read this at your own risk.

柳德米拉 Liǔdémǐlā
Lyudmila (Russian: Людмила Lyudmila) is a member of the Fatui. After completing The Outlander Who Caught the Wind, she and fellow Fatui diplomat Mikhail can be found next to the Teleport Waypoint above the fountain plaza.

She is always seen talking to Mikhail, and their dialogue changes to reflect the player's progress in the Archon Quests. 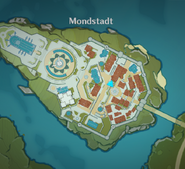 Lyudmila and Mikhail discuss the events going on in the Archon Quests, with their dialogue changing as major events occur.

Mikhail has absolute faith in the Fatui's work, scheming different ways to use the situation on hand to manipulate things in their favor. By contrast, Lyudmila is a pessimist who constantly worries about what may come; after hearing news about the death of Rex Lapis, she worries over the Tsaritsa, much to Mikhail's annoyance.

Lyudmila generally appears to be more sympathetic to the other nations in Teyvat than most other Fatui, calling Rex Lapis' death "tragic" and putting herself in the people of Liyue's shoes despite Mikhail's attempts to take her mind off the subject.

"Wind... hear me!"
The dialogue on this page is missing some branch options! Can you help out? Click here to add more.
Include dialogue variations for the Prologue acts

After Completing "The Outlander Who Caught the Wind"

Mikhail: Hey, did you hear what the informants have been saying? Apparently, the Knights of Favonius weren't working alone when they resolved the Stormterror crisis. They had other people working in the shadows!
Lyudmila: So you're telling me there's a third faction we have to worry about now? The Fatui, the Knights of Favonius, and now these guys? This is not good news...
Mikhail: I think there's an opportunity here. The people of Mondstadt don't currently know who these mysterious actors were, so...
Mikhail: ...All we need to do is dress it up a little. Run some propaganda about how the Fatui rushed to Mondstadt's aid in their time of need, resolving the Stormterror crisis once and for all... *smug laugh*
Lyudmila: That could be risky. If they saw through the propaganda, they'd end up even more mistrustful of us...
Mikhail: There's no need to worry about the Fatui's propaganda capabilities, they know what they're doing. And in any case, given how powerful the Fatui are, who would dare question us!?
Lyudmila: Hmm... Well, I wish us the best of luck...
Mikhail: I'm telling you, everything will be fine! Stop worrying!

This dialogue contains spoilers for Prologue, Act 2: For a Tomorrow Without Tears.

Mikhail: Hey, did you get the word from the higher-ups? Bunch of masked bandits broke into one of our strongholds and tore the place up!
Lyudmila: You mean someone else is out to get us now? This is not great...
Mikhail: It's too early to say. We're still not sure on the identities or affiliations of these masked intruders...
Mikhail: It could be the Abyss Order. Or it could be the Knights of Favonius, just working outside the system.
Lyudmila: Well whoever it is, we're enemy to them, so we need to be on our guard...
Mikhail: It's fine. If it turns out the Knights of Favonius are ready to throw our good will back in our faces, they will find out soon enough just where the limit of their strength is!
Lyudmila: I just hope all our efforts in Mondstadt won't go to waste...
Mikhail: Don't worry about it! The Fatui can handle this, no problem!

After Completing "A Long Shot"

This dialogue contains spoilers for Prologue, Act 3: Song of the Dragon and Freedom.

Mikhail: Hey, have you heard what the Knights of Favonius have been saying? They're claiming they've defeated Stormterror!
Lyudmila: You know, I have been thinking — the Knights of Favonius can't be as impotent as they look. I'll bet they've been keeping their true power hidden until now...
Mikhail: Hmph. Well, whatever secret weapons they might have stashed away, there's still no way they can compete with the might of the Fatui!
Mikhail: It's a pity our previous attempts to coerce the Acting Grand Master were unsuccessful...
Mikhail: Ah, it's not a big problem. Didn't you notice about Signora? She didn't seem concerned about this minor quibble in the slightest. In fact, she seemed quite pleased with herself about something.
Lyudmila: About something she's done... Or maybe something she intends to do...
Mikhail: Either way — we've got Signora at the helm, and even Barbatos himself would be no match for her!
Lyudmila: Well let's just hope Signora never meets her match in battle...
Mikhail: Relax! This is Signora we're talking about. As long as she's around, everything will be fine.

After Completing "Rite of Descension"

This dialogue contains spoilers for Chapter 1, Act 1: Of the Land Amidst Monoliths.

Mikhail: Hey, have you heard the news from our comrades in Liyue? Their archon's keeled over and died! Don't know if it's definitely true, but my word... Hahaha...
Lyudmila: What a tragic loss. It makes you think, doesn't it? Imagine if one of us were to—
Mikhail: Stop! Not another word! I get you're a pessimist, but this topic is off-limits!
Mikhail: I was just making conversation, I didn't mean anything by it...
Lyudmila: We should focus on our part. If our comrades in Liyue are making their move, we need to make preparations here, too.
Mikhail: Things may or may not kick off in Mondstadt too. If they do, it'll be time for the Fatui to show our loyalty to Her Majesty the Tsaritsa!
Lyudmila: May the Tsaritsa always remain in good health...
Mikhail: Hey! Snap out of it, will you!

After Completing "The Fond Farewell"

Mikhail: Hey, you heard what the Liyue merchants have been saying? It's true — their archon's really gone and died. They did a whole funeral and everything!
Mikhail: If you think about it that's a good thing for the Fatui. This is likely to cause major upheaval in Liyue...
Mikhail: If we can take advantage of the power vacuum during the ensuing chaos...
Lyudmila: But we'll just have to wait and see whether this is ultimately good or bad news.
Lyudmila: It may cause difficulties for us. Economically, for instance — Liyue is the biggest trading hub in Teyvat after all...
Mikhail: What's the worst that could happen? You're worrying over nothing. Snezhnaya's economy is rock-solid, we won't be affected.

This dialogue contains spoilers for Chapter 2, Act 1: The Immovable God and the Eternal Euthymia.

Mikhail: Have you heard what our envoys to Inazuma have been saying? They sent a letter recently, saying that the Inazuma Shogunate has gone to war with the rebels!
Lyudmila: Rebels... A war... Our comrades in Inazuma won't be caught in the crossfire, will they?
Mikhail: Hah, I doubt it. We Fatui are official foreign envoys in Inazuma, and there's a Harbinger with us, too. We shan't be so easily swept up in their internal squabbles!
Mikhail: Ah, Inazuma. They call it the eternal nation, but they can't even settle their own disputes. Now that's a good joke if I ever heard one!
Lyudmila: Regardless, a war is always going to be a highly volatile factor.
Lyudmila: If Inazuma, one of the Seven Nations, is truly in trouble, it may yet affect the progress of Her Majesty the Tsaritsa's grand design...
Mikhail: Oh, there you go again. How could Inazuma not hacking it affect our mighty motherland Snezhnaya?
Mikhail: If anything, I'd say that the chaos there is a great opportunity for us to get things done.

After Completing "Duel Before the Throne"

This dialogue contains spoilers for Chapter 2, Act 3: Omnipresence Over Mortals.

Mikhail: Hey, have you heard what our superiors have been saying? The Vision Hunt Decree that Inazuma was strictly enforcing has been abolished!
Lyudmila: The Vision Hunt Decree... Wasn't that something that the Electro Archon promulgated herself? To think that even one so exalted as an Archon could change their mind...
Lyudmila: Well, the more shocking thing I've heard is that Lady Signora, the Eight of the Harbingers, was...
Mikhail: Well, about that... I think that some sacrifices were inevitable on the path of Her Majesty's great work.
Lyudmila: But Lady Signora's a Harbinger... What happened, I wonder, that she wound up losing her life?
Mikhail: Who knows? People change, after all. Perhaps her strength was insufficient to remain a Harbinger. I don't believe that such a thing would have happened to her otherwise...
Mikhail: Just you wait. I'm sure that our Eighth seat will be filled by someone even more powerful. And when that happens, we Fatui will be all the stronger for it!